Apparently making a pattern in 3s is something I do. When you find an awesome one, though… 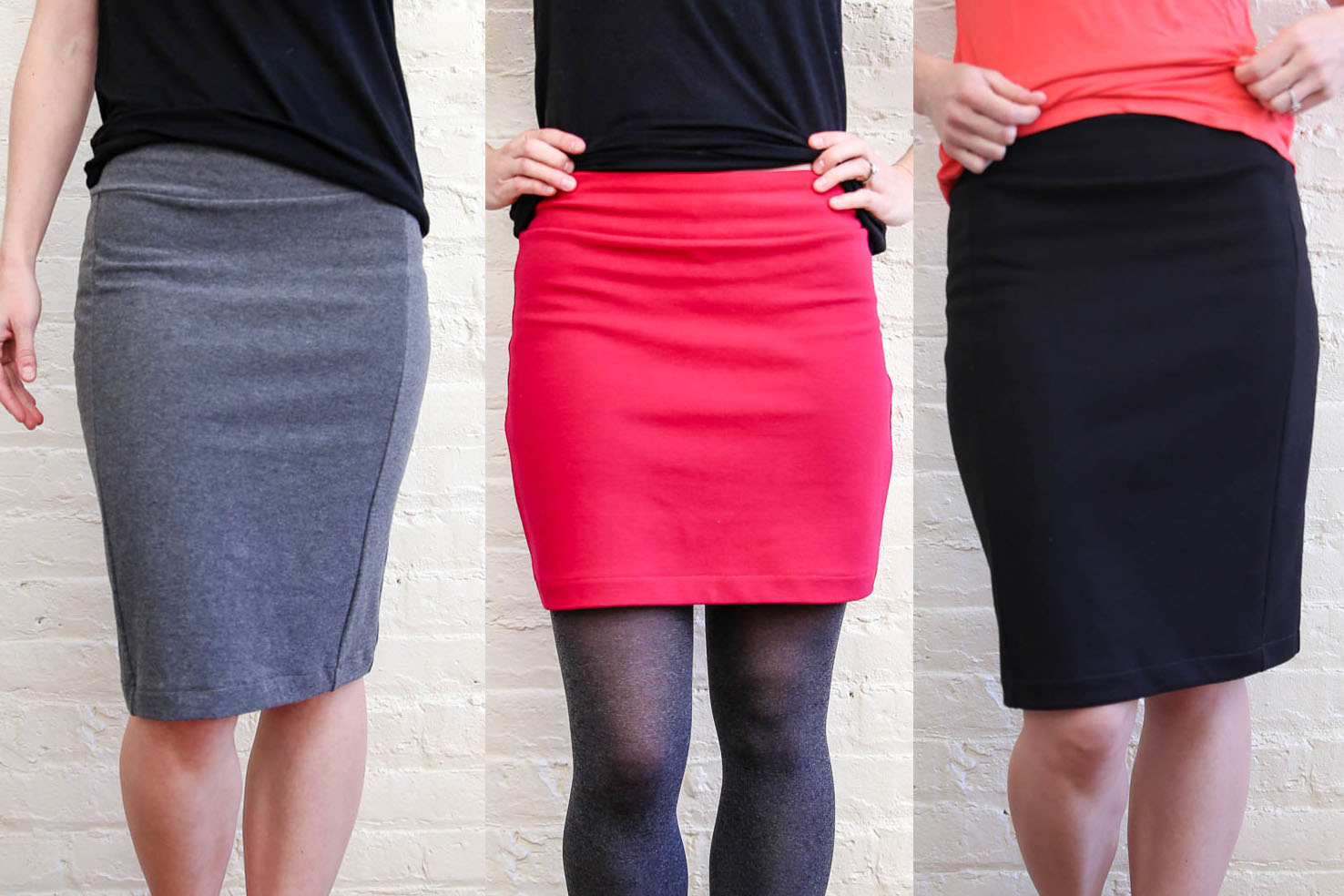 I picked up this Mabel Skirt pattern back in November during Colette’s Black Friday Sale. I bought several patterns at once, and it’s taken me a little while, post-holidays, to get around to them. But they are all SO GOOD so far. Black Friday was good to me.

I picked up fabric for all three of these skirts at Vogue Fabrics, which is local to me. I am starting to figure that crazy place out, which, in turn, means I’m starting to love it and all of its quirks. It’s kind of like the grumpy old lady that lives next door who ends up being your BFF; a little eccentric and misunderstood with a laundry list of idiosyncrasies–but able to add so much value if you’re willing to pay attention. You get me? 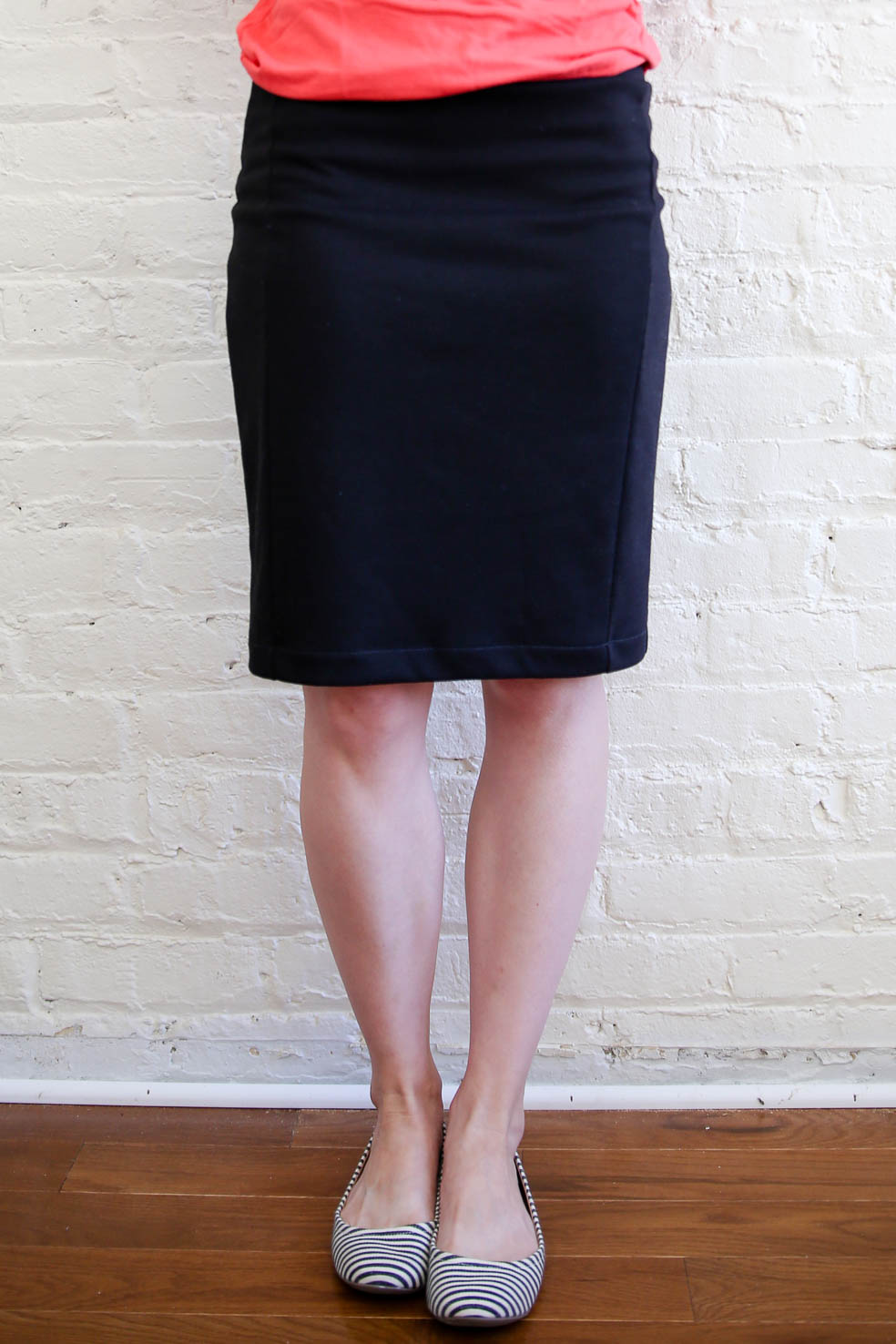 The first one is the pencil skirt cut in a straight size small in Vogue’s Sophia double knit (in black). It’s the same exact fiber content as the navy ponte I ordered from the UK for my navy Morris Blazer, and, while it’s not nearly as soft, it is pretty nice…so I’m interested to see how it holds up. Since I didn’t have to pay shipping, this was cheaper than ordering the same ponte in black. I only needed 3/4 yard for this skirt, so it cost ~$9.75. 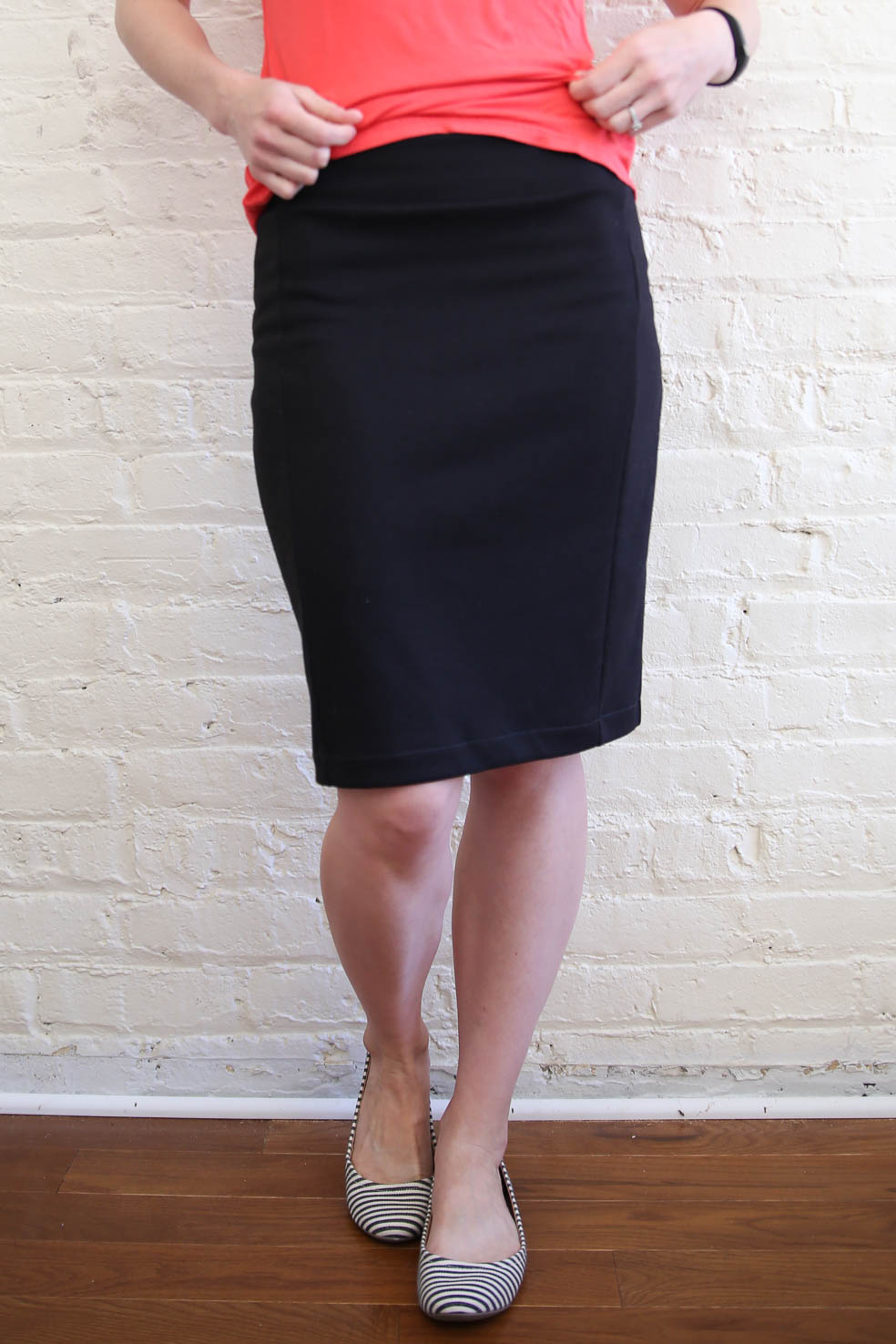 The pencil skirt view has a three-panel front which is visually slimming. It would be fun (and even more visually slimming) to do a light color in the center panel and darker on the outsides: teal+navy, white+black, blue+black (what color do you see? jk, sorry). 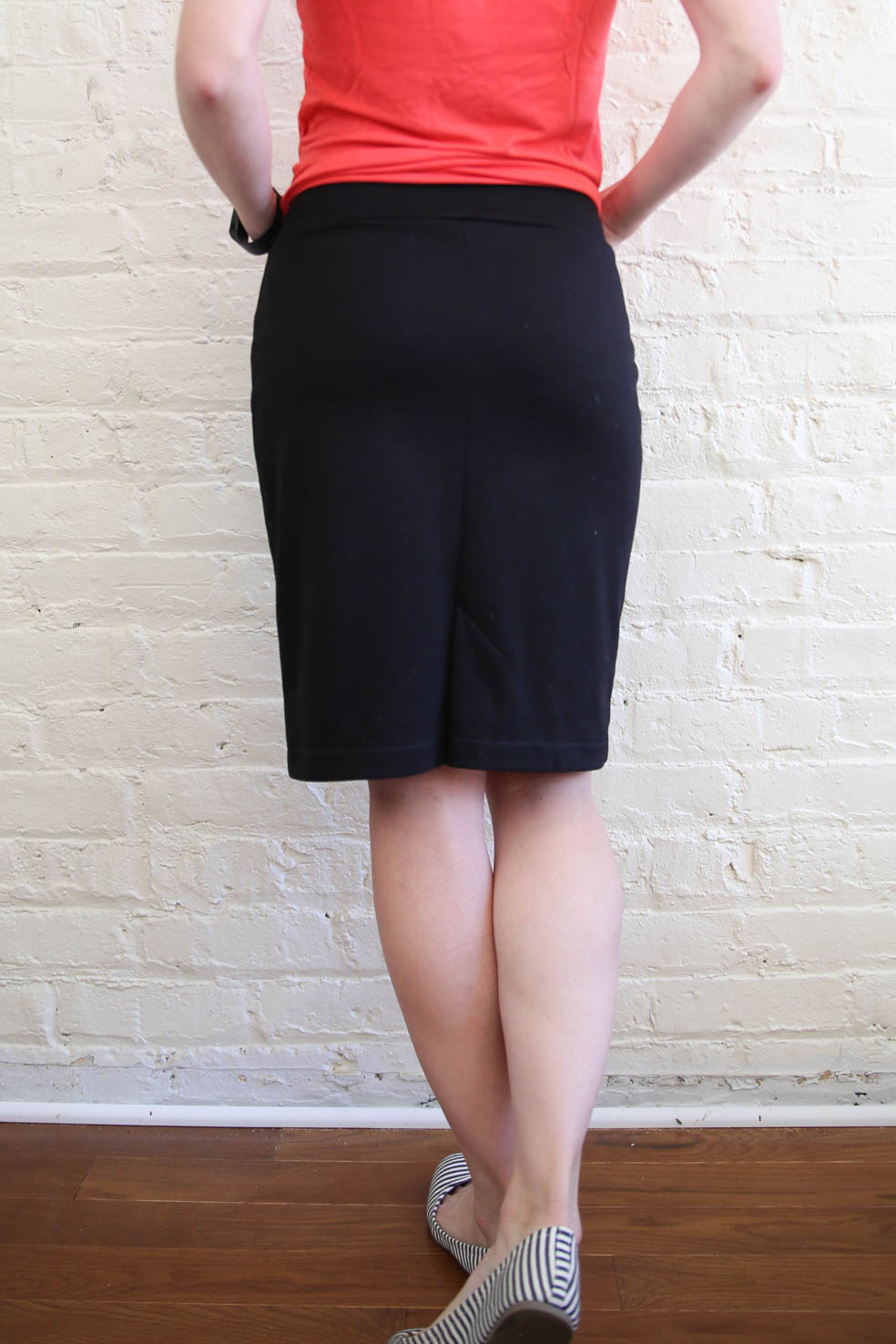 The back of the pencil skirt version has a kick pleat which is both cute and very necessary for movement. 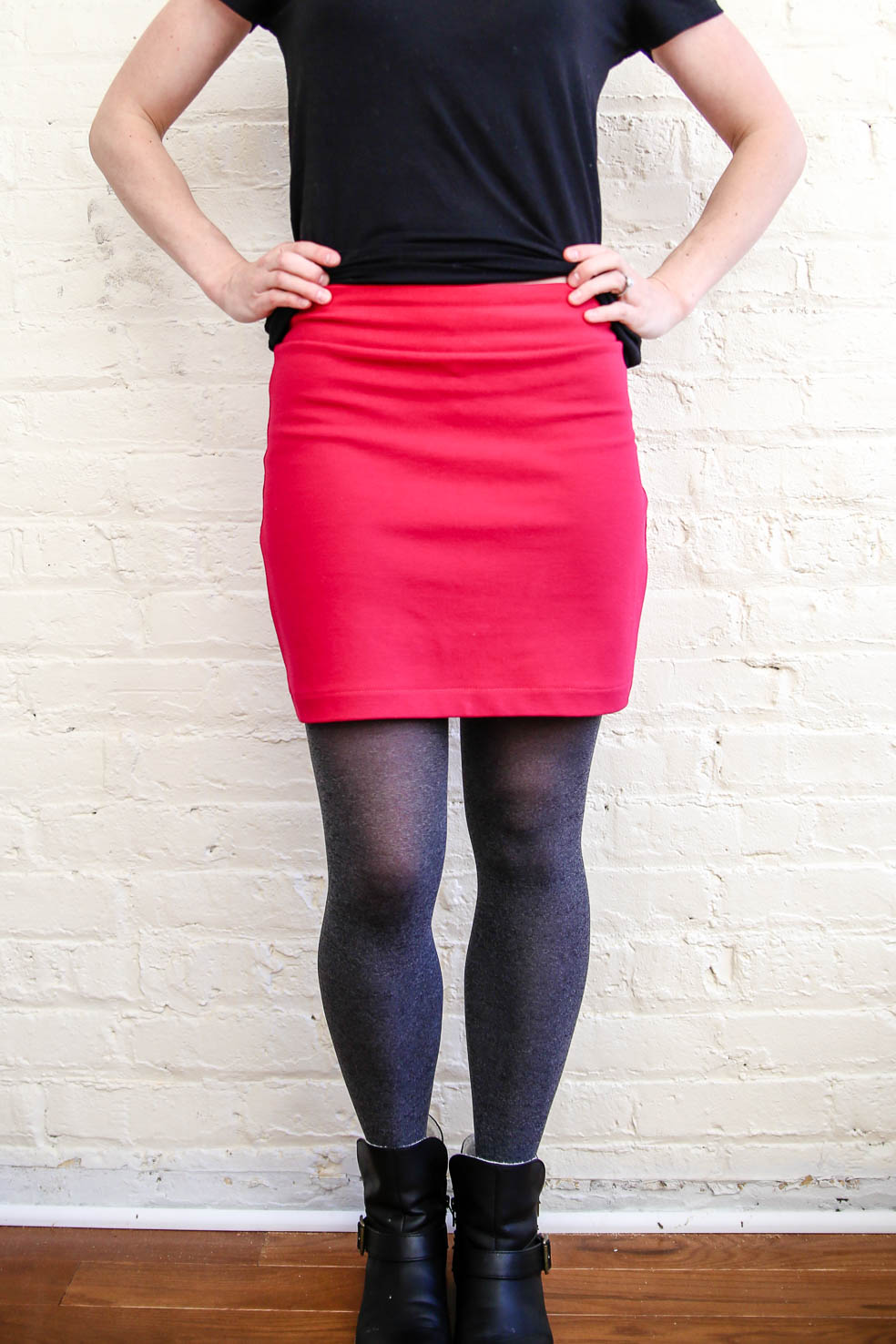 The second Mabel I made in the mini skirt length in Vogue’s Sophia double knit (in sangria). I was just going to make this up in black and gray, but then this color practically grabbed me from the shelf, so it came home, too. It’s perfect to throw on over tights on cooler days, but will also transition well to warmer weather due to length and color. This one also cost ~$9.75. 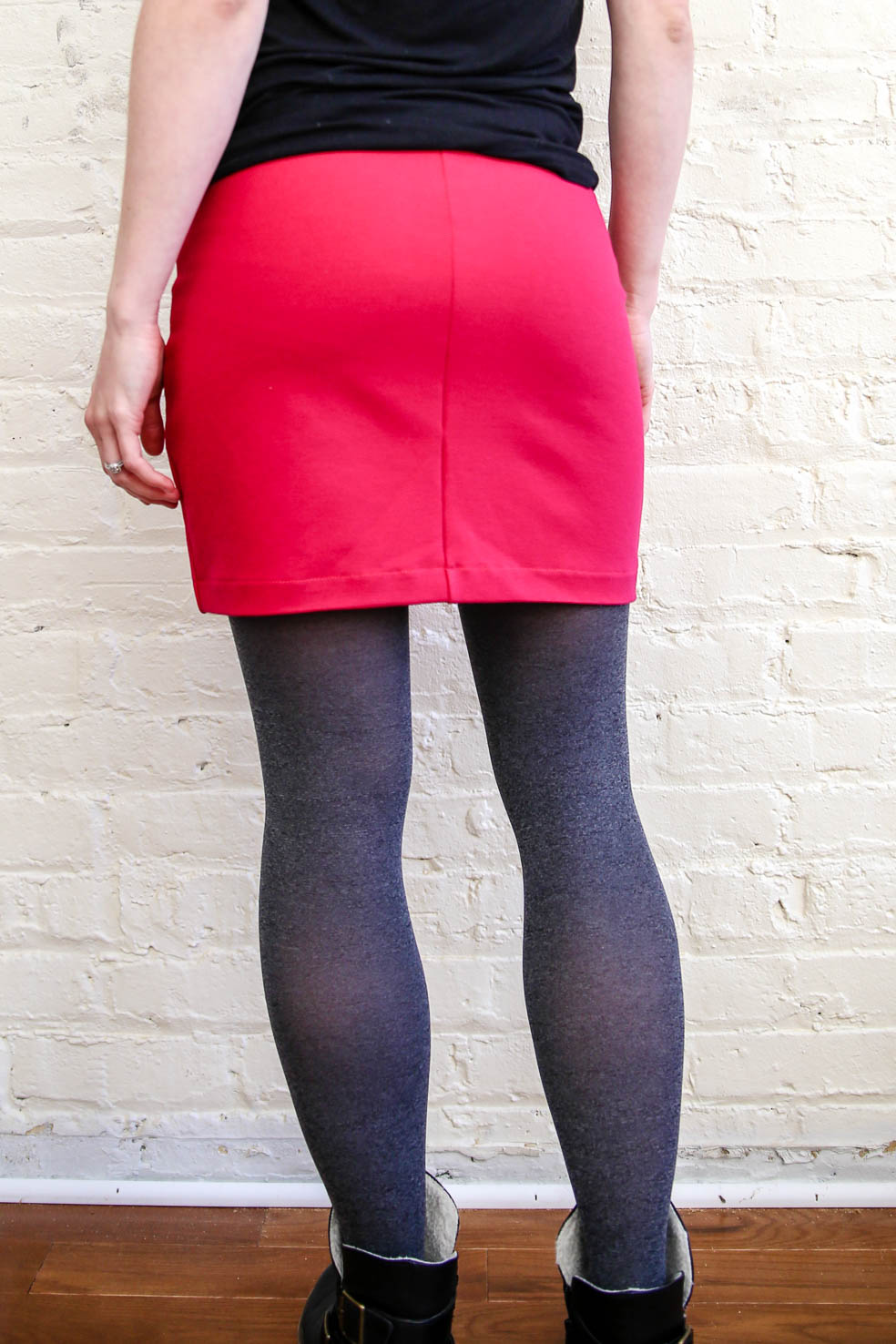 I graded this one up 3/4″ in both front and back to give me more ease. The pattern is written with negative ease and I wanted this version to relax just a bit. I also didn’t want a mini skirt riding up while I walked. Sometimes I’m walking with a kid in each arm and literally have no free hands……..soooo, it would be awkward if my skirt started riding up in that scenario. 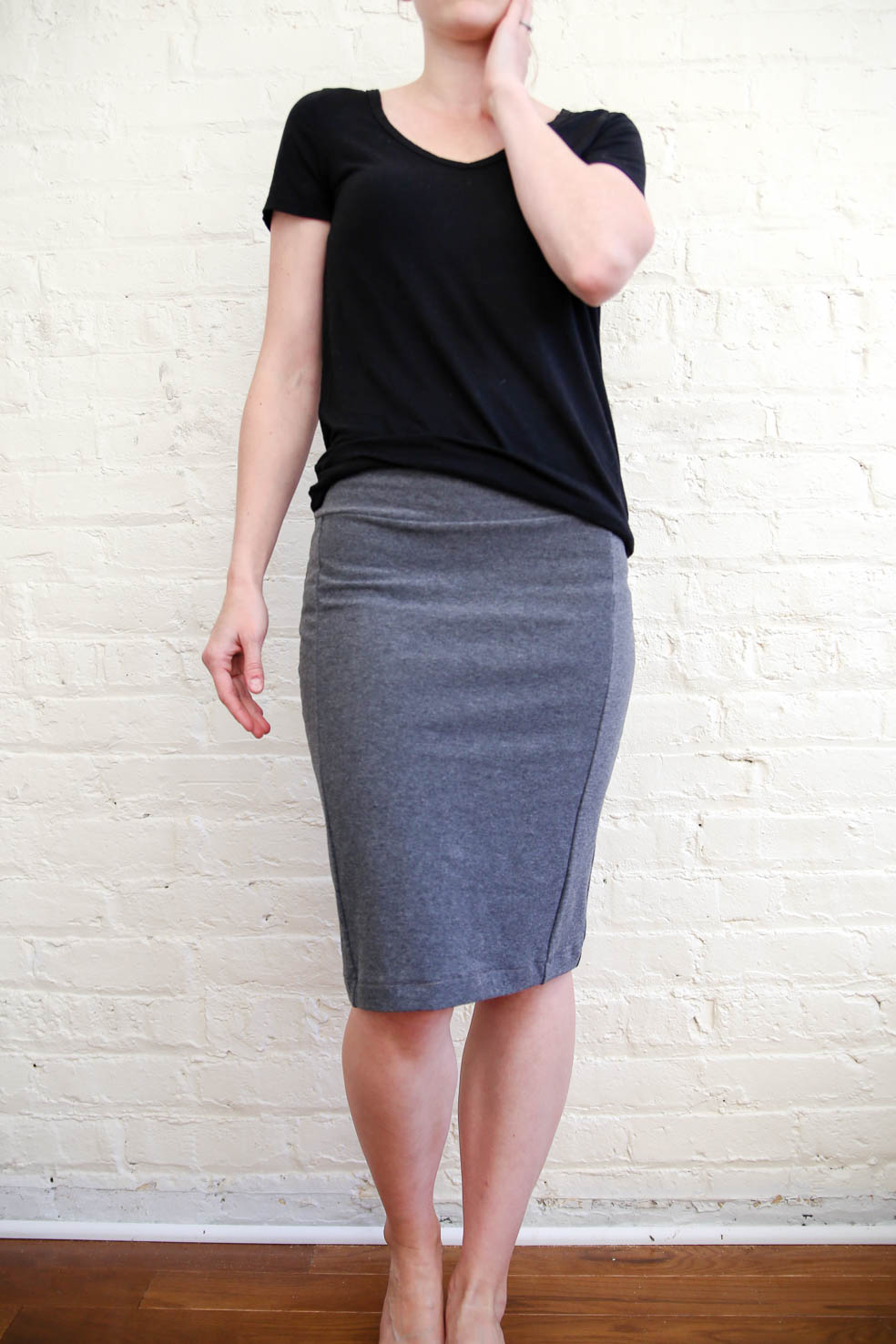 The third I made in Vogue’s Laguna Cotton Jersey (in heather gray), which shows the front panels much better than the black in photos. I already knew I wanted to make a dark heather gray version, and was hoping to find it in a heavier knit, but alas, no luck. But, I really, really, really didn’t want VPL…so, I decided to completely underline it. If you’re newer to sewing, that just means that I cut out each piece twice, but sewed the whole thing together as one. It’s like a lining…an underlining! 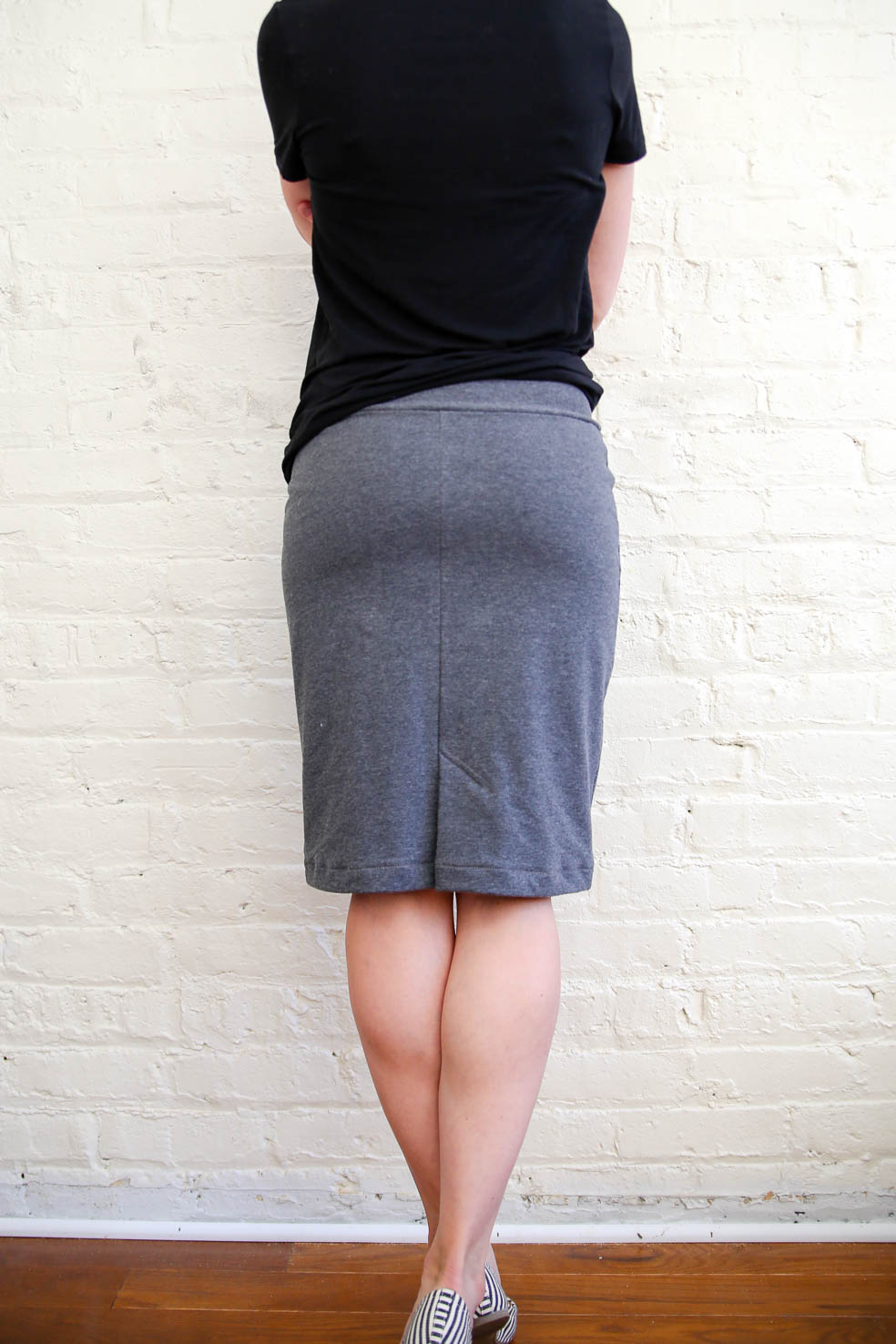 To make the underlining behave, I trimmed a scant 1/8″ off of each side to account for turn of cloth and to make it a teeny bit snugger than the outside layer–that way both layers lay (lie?) smoothly and don’t ripple.

Since I basically cut out two whole skirts for this one, I needed 2x the fabric. I also used this fabric to line all of my waistbands, so this skirt was ~$20. 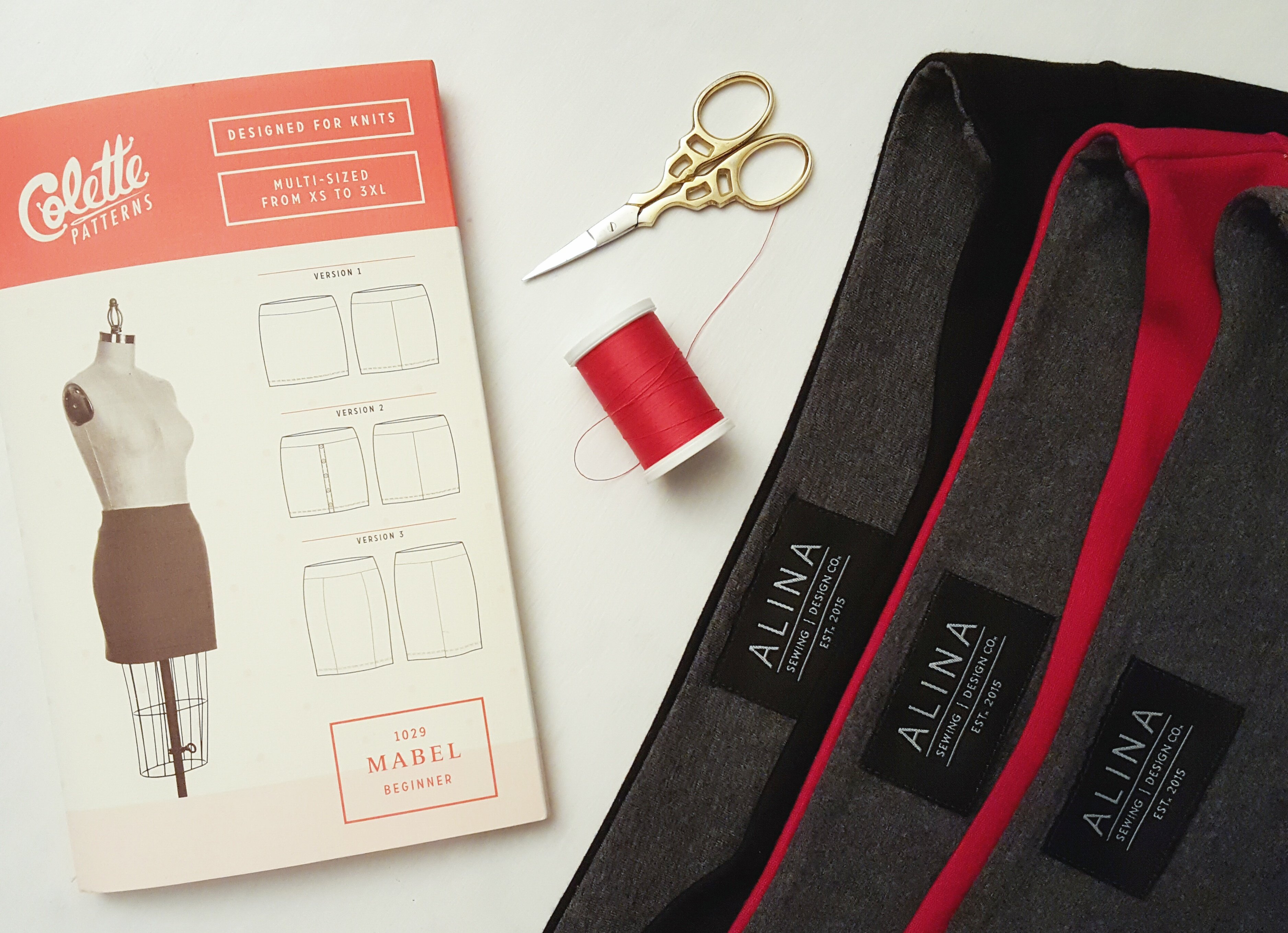 One last thing I changed: the pattern calls for a double needle hem or coverstitch. I do not own a coverstitch machine, and I have had to repair more than one hem sewn with a double needle (just can’t get the tension right or something!), SO I used my machine’s triple stitch. That baby will stretch for daysssss without popping threads. I’ve already tested the black skirt hem trying to squeeze into my #swaggerwagon in a tight parking space and–cue the angels–no popped hem. I recommend it.

And that’s it, folks! I also bought the Nettie Bodysuit pattern during Black Friday, and haven’t made it yet…I wonder if I will make three? (Because, remember, that’s also when I bought the Morris pattern?) I mean, if you think about it, a Mabel, a Nettie and a Morris WOULD go together perfectly, so maybe it’s meant to be! I’ll get back to ya on that one. 😉

Have a good week!