Cardigans. They’re so functional and can be cute. And I don’t love how they look on me. They always look a little bit frumpy, bulky, and unflattering. (In my opinion…probably no one else has ever thought this about me in a cardigan–ha!)

So, I’m really excited about this pattern. Like, really, really, REALLY excited. Written by Jen of Grainline Studio (here in Chicago!), I purchased the Morris Blazer pattern during her Black Friday sale. 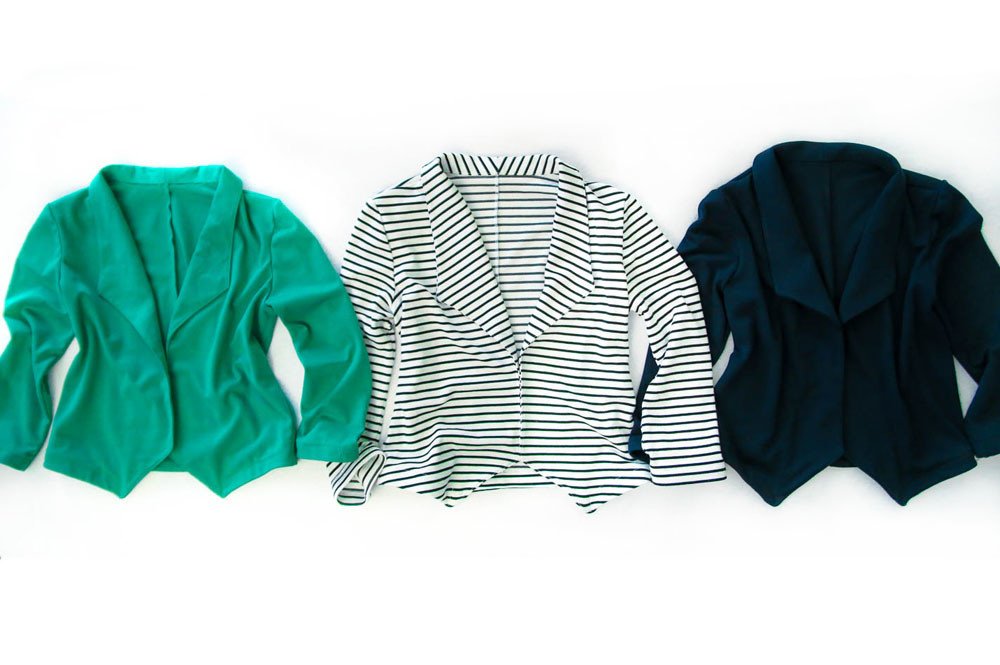 I finally got around to putting it together in January. I had also scored a bunch of fabric from Girl Charlee on Black Friday, so I had this kelly green ponte sitting in my stash. I tend to only buy fabric once I have a specific project in mind, so it was fun to already have something on hand. 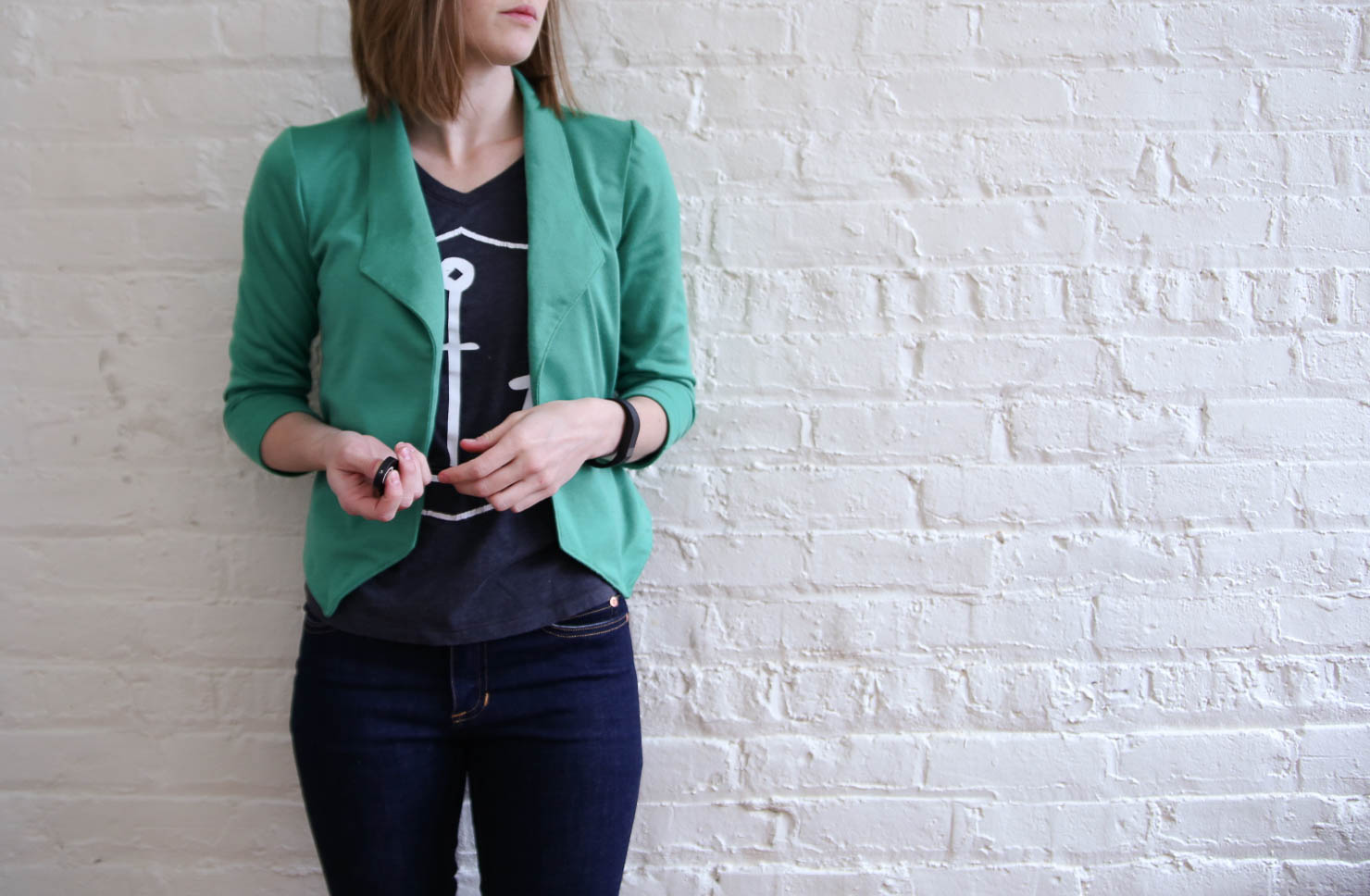 Since I got this fabric on a deep sale, it was the perfect choice to make a wearable muslin out of. I cut a straight size 2, no changes, and it’s the perfect fit for my frame. The first time I put it on, I thought, “My cardigan issues are solved!!!” It adds a layer of warmth, but has the structure that a cardigan lacks. It’s perfect to throw on over jeans and a t-shirt (or a dress!) for immediate dressed-up results.

It is a fun and fulfilling pattern to sew. The finished product is somewhat impressive, yet is quite simple and quick to sew up. And (!) you can sew this up in both knits and stretch wovens, so it is super versatile. 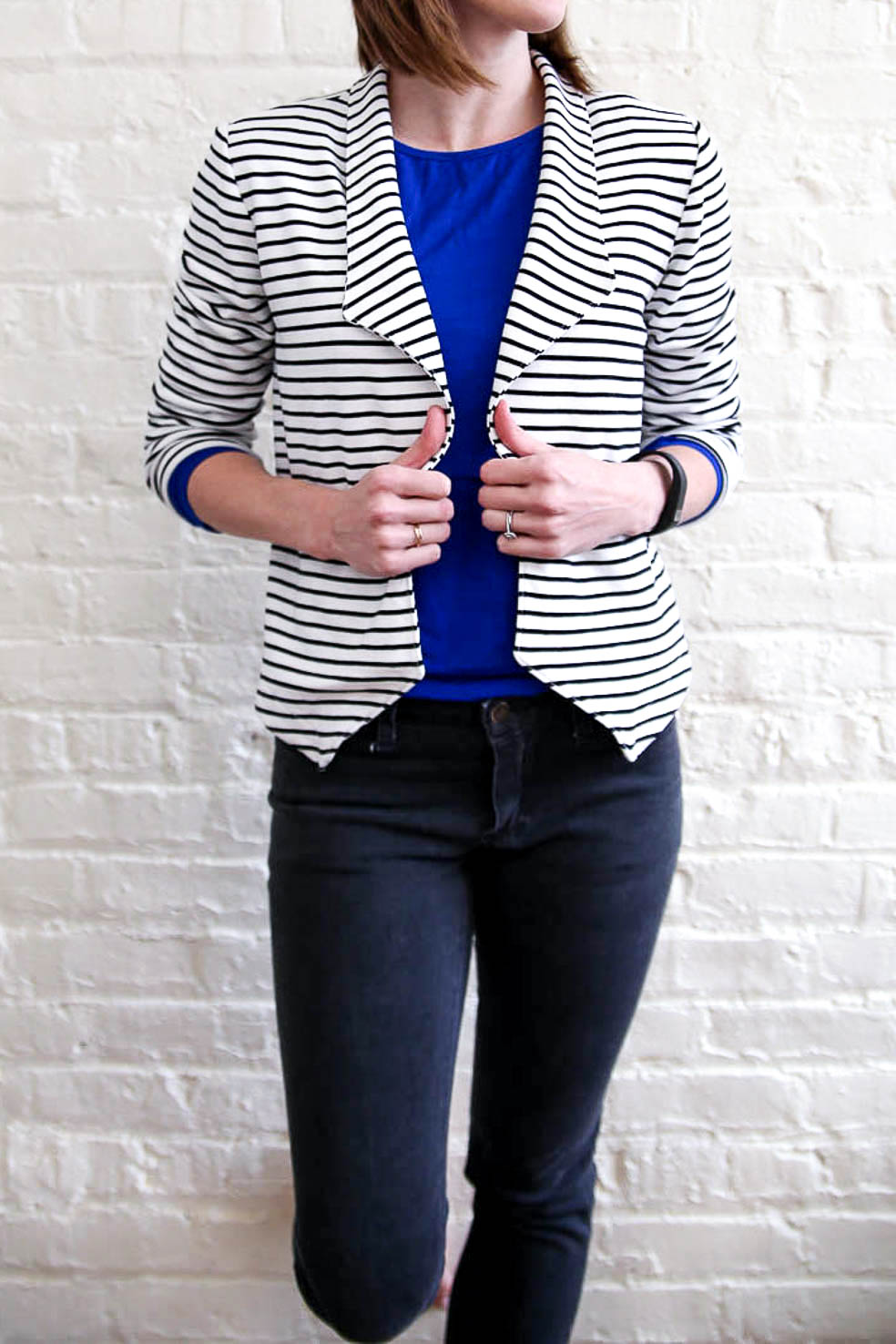 Obviously, I didn’t stop with the green ponte. Next, I ordered and picked up some B&W stripe double knit from Vogue Fabrics (I can’t find it on their site anymore–I know they had it for their roadshow, so they may have sold out). You saw this one over my Savannah Sheath a few days ago, but I also love it over any of my jewel-toned tees. I’m drawn to saturated colors and high-contrast design, so I really love this addition to my wardrobe. 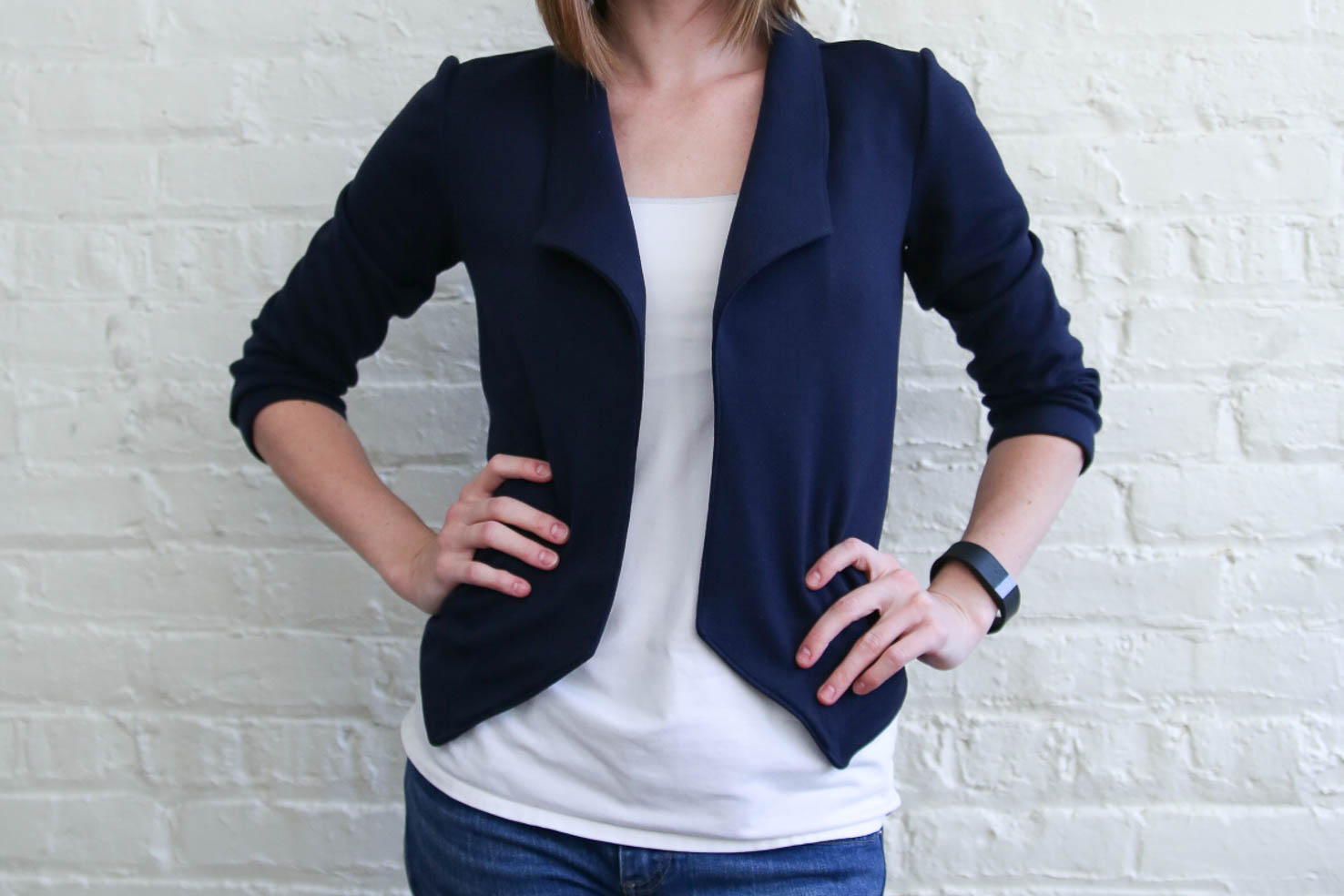 The third one I made in this Romola Navy Ponte di Roma from The Splendid Stitch in Glasgow (UK). This ponte is hailed to be very pill-resistant, which is important for something that is going to get worn this much. (My green is already showing pilling under the arms.) Even with international shipping, it was the same price as the B&W from my local pick-up at Vogue. And guys–it is buttery soft. It was a joy to cut and sew. 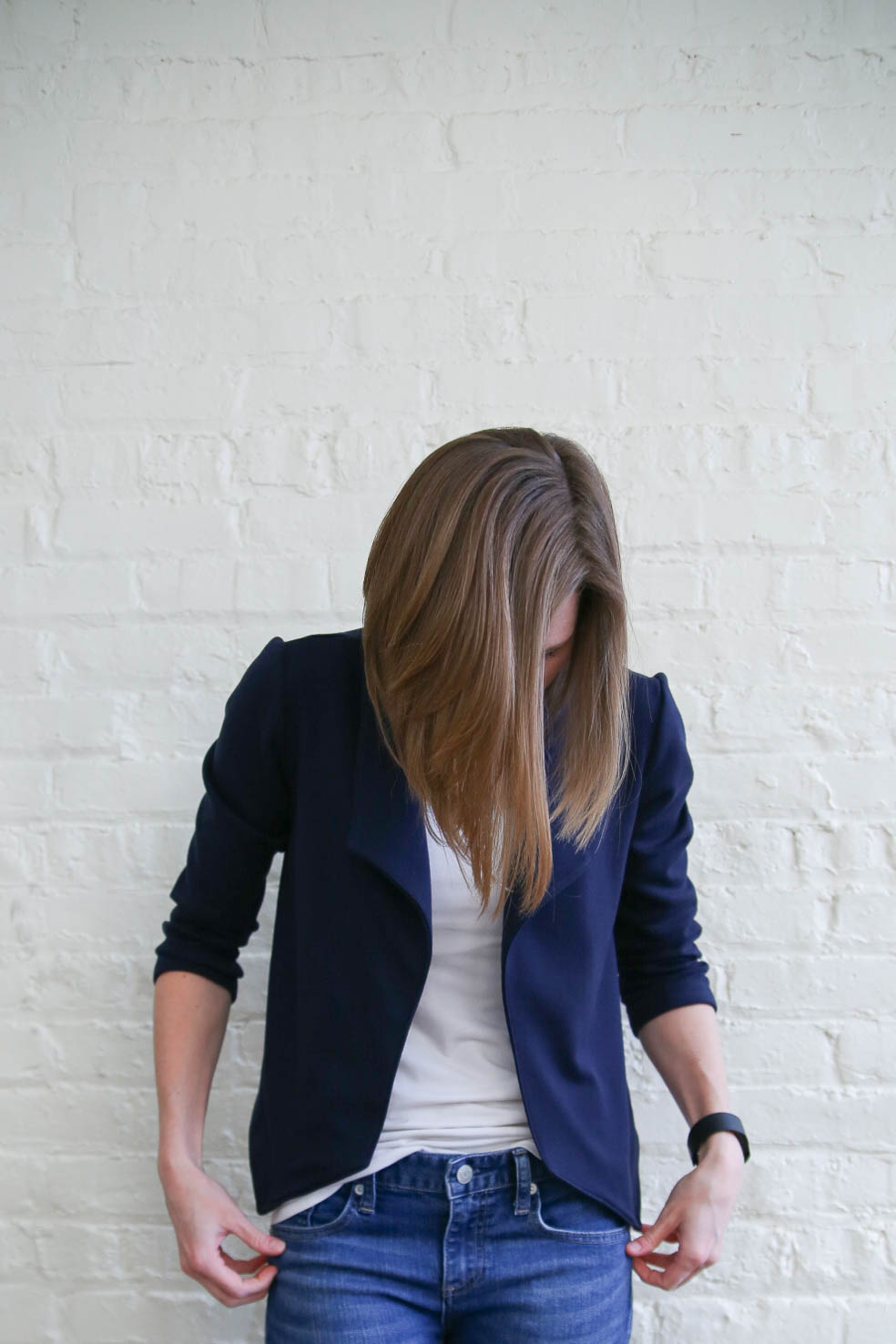 The navy is like the ultimate wardrobe staple. Jeans + white tee + navy blazer = done. Can’t be topped. I’m envisioning it with a grey tweed-ish pencil skirt now. (See? This is how sewing works…you make something and then you think of something else that thing would go great with and it, ahem, snowballs.)

I [thought I] only had some black woven interfacing on hand when I made the green, so I used that, but later realized I had some fusi-knit, and used that for the B&W. And you know what? I totally dig the drape of the woven interfacing vs. the knit…so I did the navy with woven as well. You interface the hem/lapel-collar/sleeve facings, and the woven seems to keep everything in place better than the knit (though you might still use the knit on sleeve facings if you want the extra stretch and ease around your forearms).

I don’t currently have plans for a fourth, but that’s only because I haven’t thought of another color I NEED it in. (Except maybe black…) You guys–THIS PATTERN!

[Pattern also predominantly seen in this post is Ginger Jeans–the black and dark indigo pairs above. These two patterns together are my favorite combo EVER.]

What are your favorite, life-changing patterns?

Finally, a bit of business: on my old website, I had a Feedburner-driven form for people to subscribe and get blog updates via email. It worked great. Unfortunately…it’s still working great, because those emails are still going out as My Yellow Umbrella Blog & Shop.

I have invested several hours into trying to figure out how to claim and rename the feed…but I can’t figure it out. Elise even switched everything back to the old URL (because she’s awesome) so that I could “claim” the feed on Feedburner, but I think I simply should have realized this before all of the changes were made, because that still didn’t work. (It shows zero email subscribers, which I know is not true, based on me still receiving the e-mails and a handful of you who have contacted me.)

*SO*: if you’re receiving this via e-mail and it says “My Yellow Umbrella Blog & Shop,” one option is that you may unsubscribe from that list (there is an unsubscribe link at the bottom of the email), open up https://alinadesignco.com/2016/04/01/morris-blazer-pattern-x3/, scroll to the bottom of the post, and fill out our new subscription form right above the comment box (just your email). This is the new feed, going through a difference service that I will always be able to claim (darn you, feedburner!). I know that takes some fixing on your part, but I simply don’t know what else to do at this point.

Another option is that one of you awesome people knows how to fix this and contact me to tell me how. 🙂

While you’re there re-subscribing, subscribe to our newsletter as well (if you want!). The form is in the sidebar (very bottom if you are on a mobile or tablet). I will send periodic newsletters to announce our future shop opening, calls for pattern testers, and other fun announcements. Newsletter subscribers will get the inside info first, so, if that interests you, make sure to subscribe!