The dress I paid $22 for…and a whole lot of sanity. 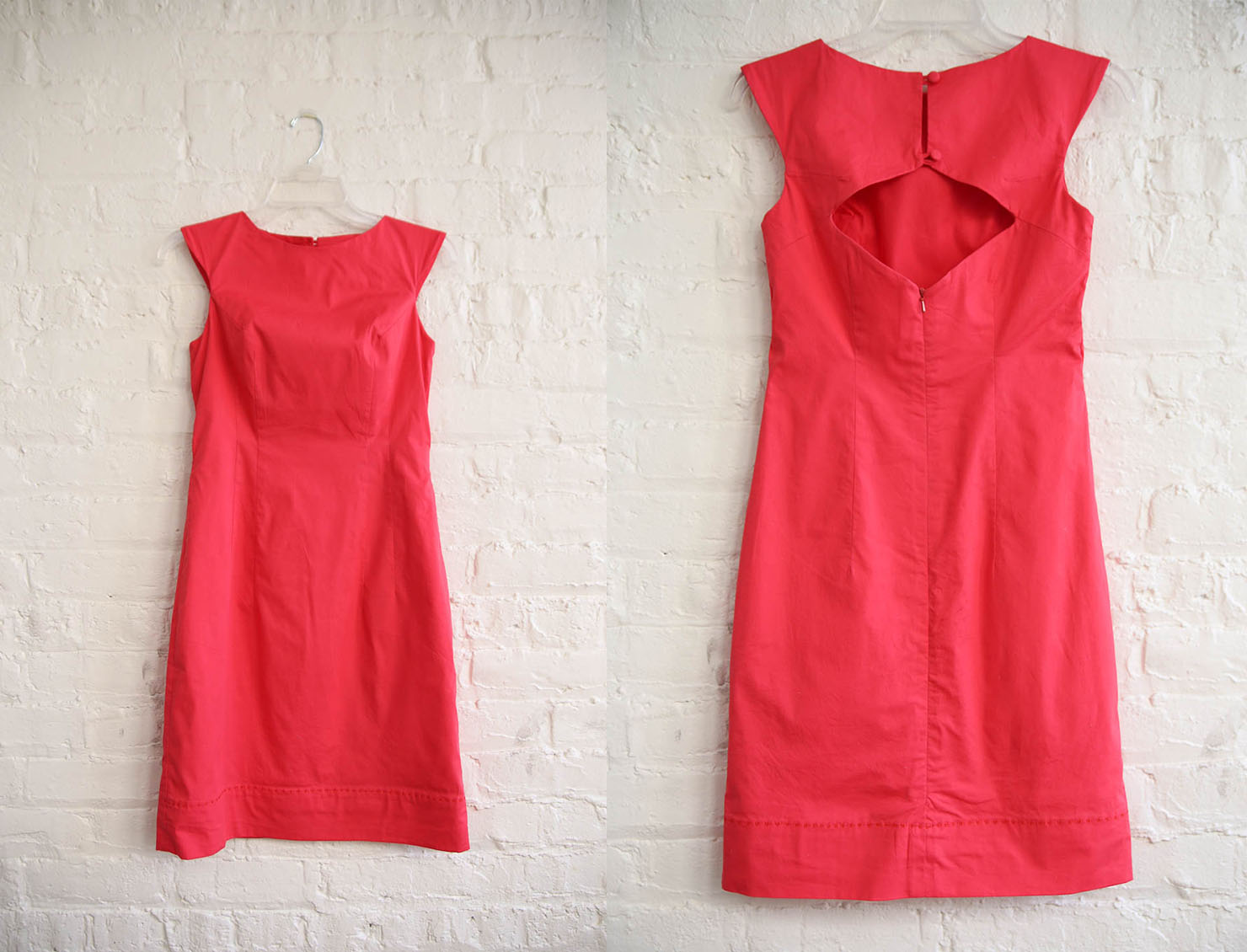 On March 12, the last remaining SINGLE man of my husband’s brothers got married and we added an AMAZING sister-in-law to the family! 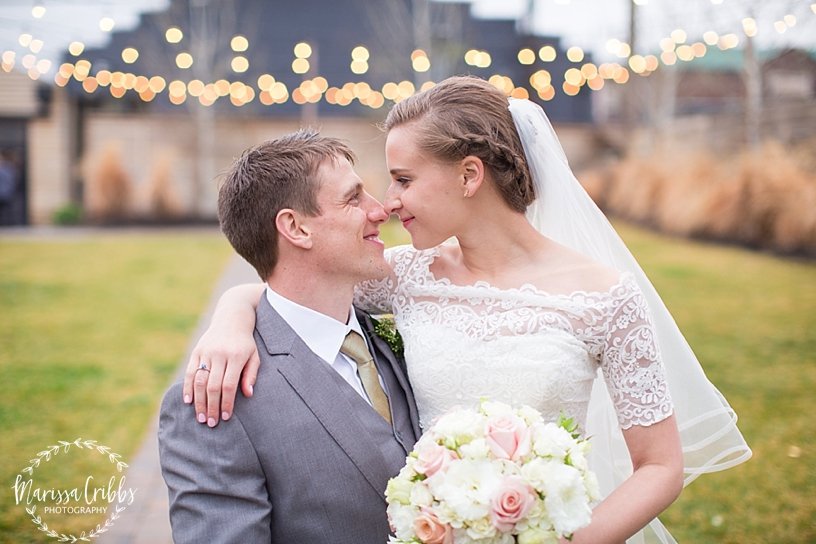 I knew I wanted to make a dress for this wedding several months ago………but, you see–the holidays happened (!) aaaaaand then we took a two-week trip in January/February……..aaaaaand by the time I got around to drafting the pattern for my dress, I had less than two weeks left!

I waffled on what kind of fabric and what colors I wanted for about another week (though I did work on the pattern in the meantime), and finally decided on a beautiful coral stretch cotton sateen. I placed my order and two days later, I received a notice that the fabric was out of stock. Back to square one.

I started looking elsewhere and had my mind set on another stretch cotton from Mood, but then realized that I was far too close to my deadline and shipping would cost me a fortune. 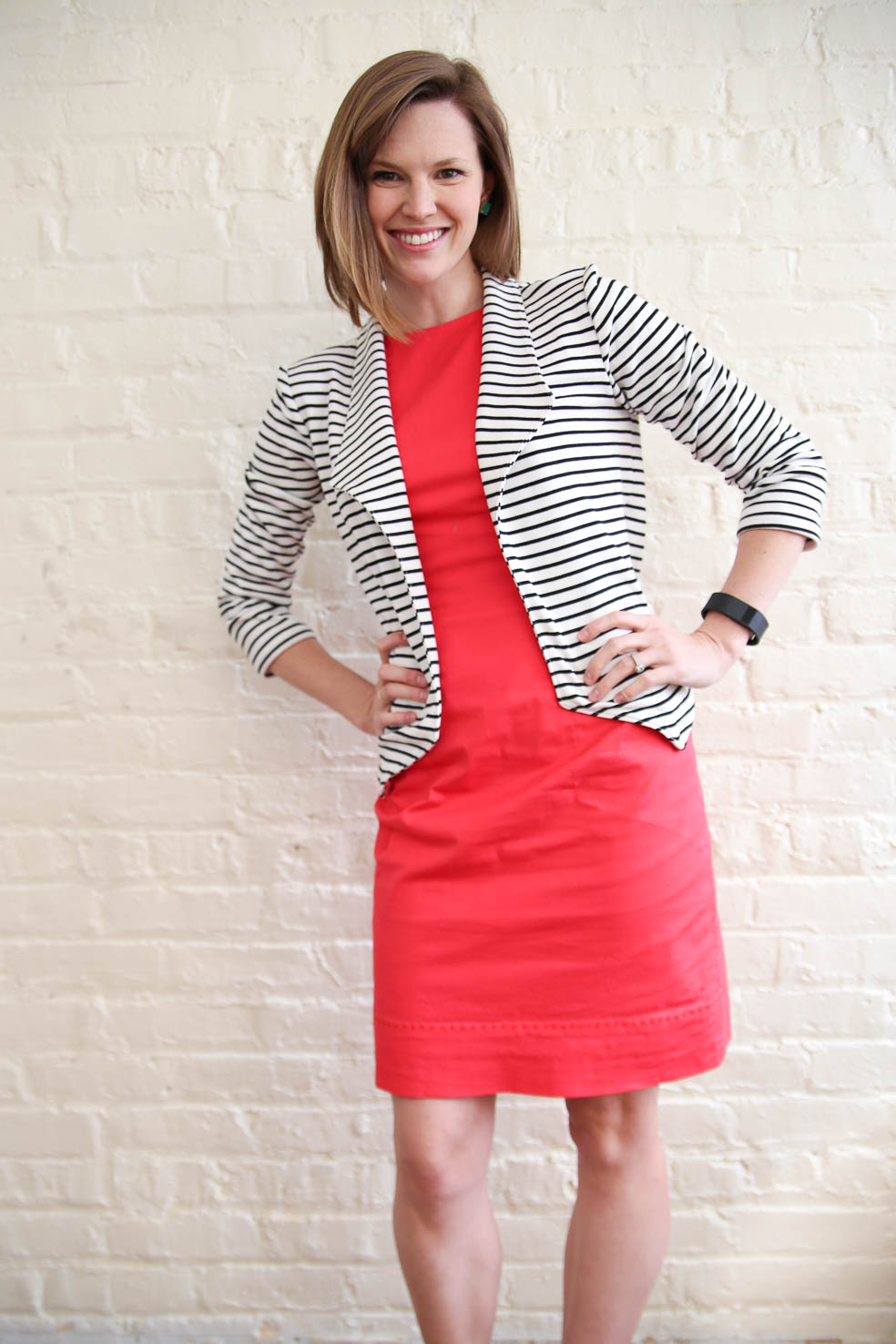 (I made a Morris Blazer to go over the dress while I waited for my dress fabric, but I’ll write a separate post about that.)

So, since Vogue Fabrics is just a skip, hop, and jump away from our apartment, I decided to order this stretch cotton in persimmon. However…it was in their warehouse, so I couldn’t see it in person until I went to pick it up from the store. (It didn’t look quite this bright or this pink online [on my screen], but it turned out to be a great color for my complexion, even if I freaked out a little when I opened the box…and maybe continued freaking out as I sewed through a sea of pink.) 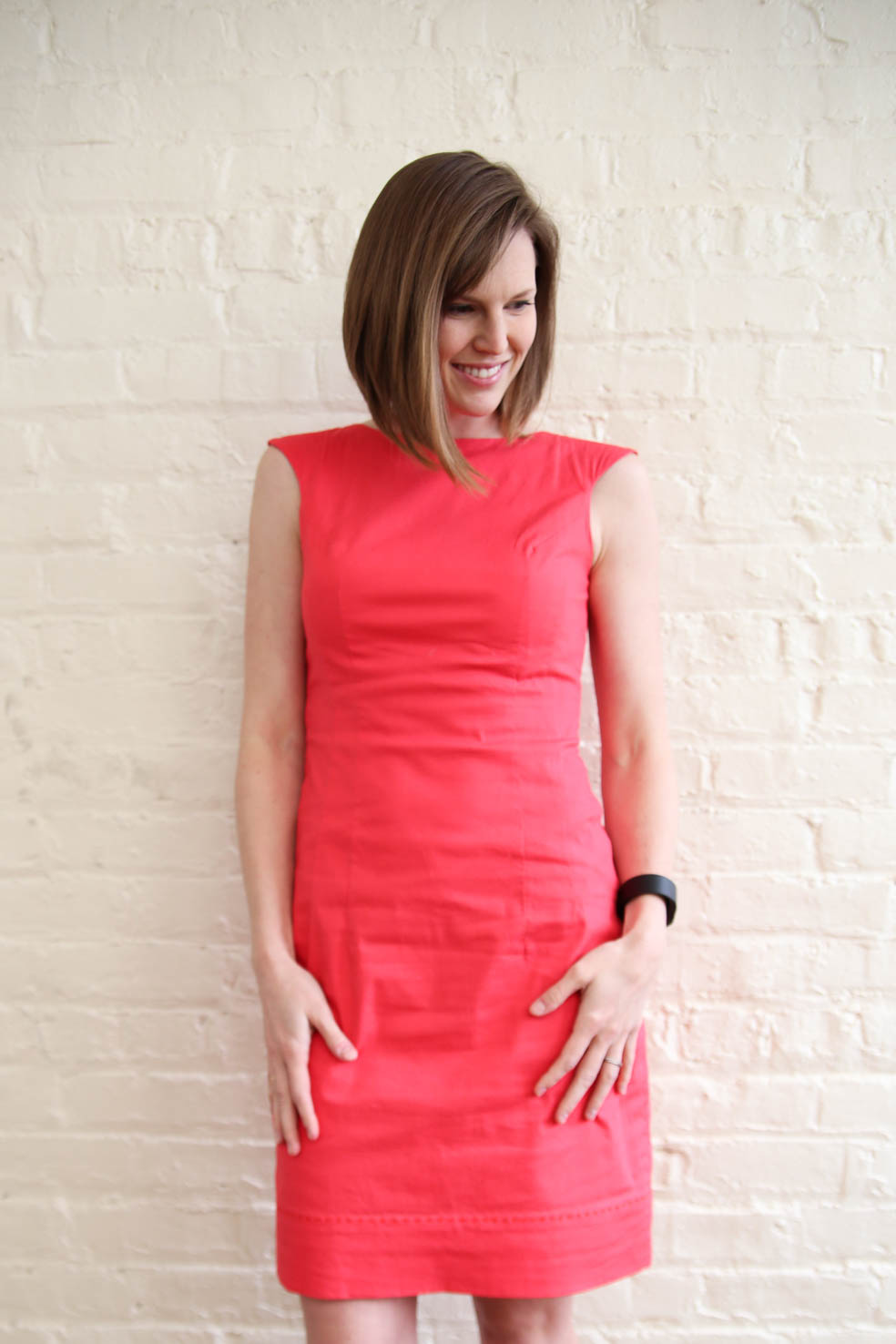 Every other time I’ve ordered from Vogue for in-store pick-up, it’s taken 48-72 hours. A week (and a couple of phone calls) later and no fabric, I finally found someone who could tell me where my order was…and they’d shipped it on accident. USPS tracking said the expected delivery day was the day before (*cue panic!*). 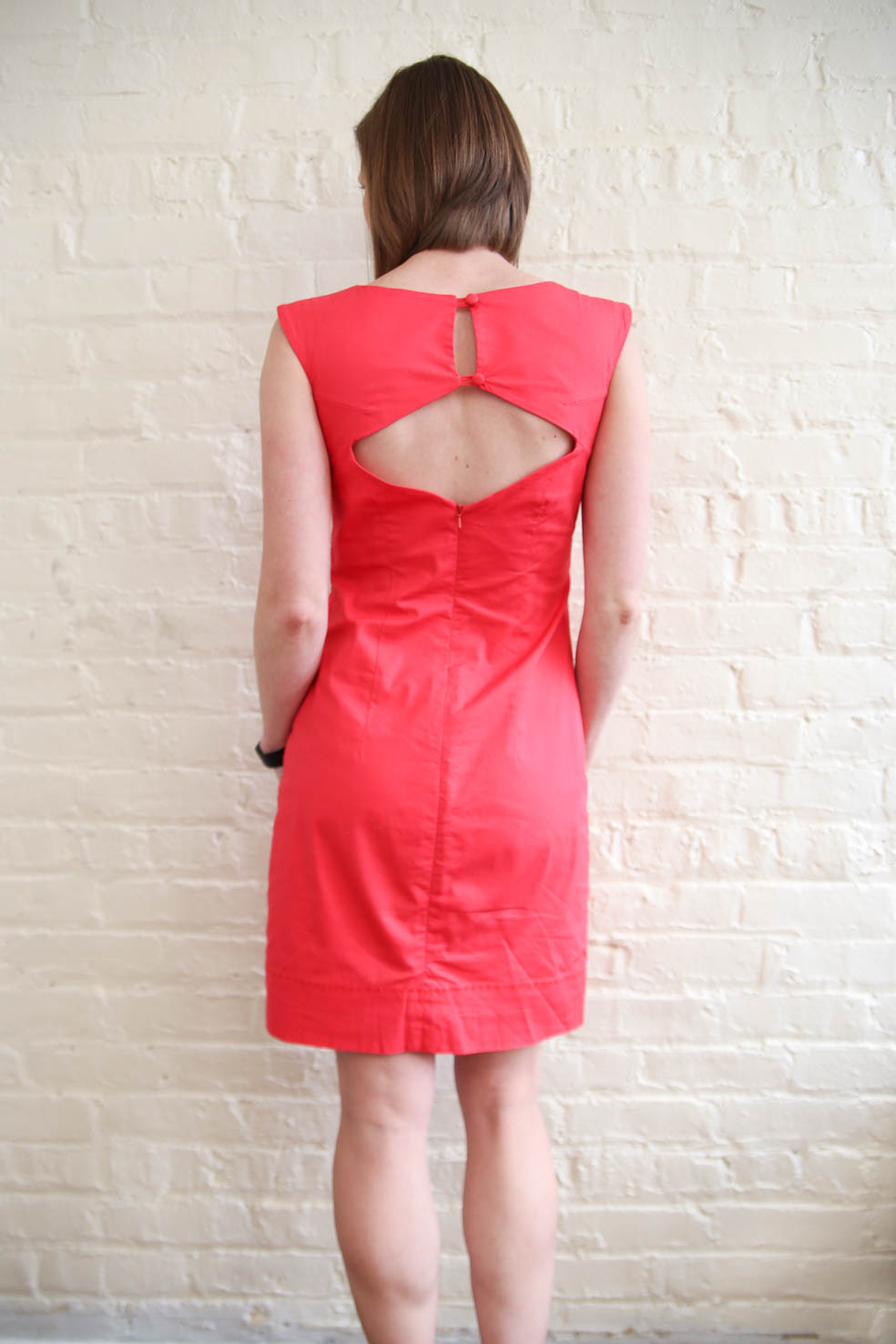 Just so we’re tracking here–this was Thursday and we were leaving for the wedding on MONDAY. I’ll save you the panic and tell you that it finally dislodged from wherever it had gotten stuck with USPS and arrived on Friday night. It was simultaneous angels singing and panic rising because–thanks to plans already made for Sunday–I only had Saturday to make the entire dress.

I have a one-year-old and a two-year-old.

And an angelic husband who let me hole up for the day to get everything done. PRAISE. THE. LORD.

Anyway, I finished it. I had no back-up dress because that would have made things less stressful…so of course I didn’t.

Once the fabric arrived, it was much thinner than I’d thought it would be, meaning I needed to fully line it (I had already written pattern pieces for facings instead). Fortunately, the stars aligned for me at this point because when I ran back into Vogue on Saturday morning, they had a stretch cotton lining in the exact color as my dress fabric. Unfortunately, this means I had to sew 14 more darts. (!) The lining is tacked to the zipper inside, but otherwise hangs freely, except for where I french-tacked the hems together at the side seams. 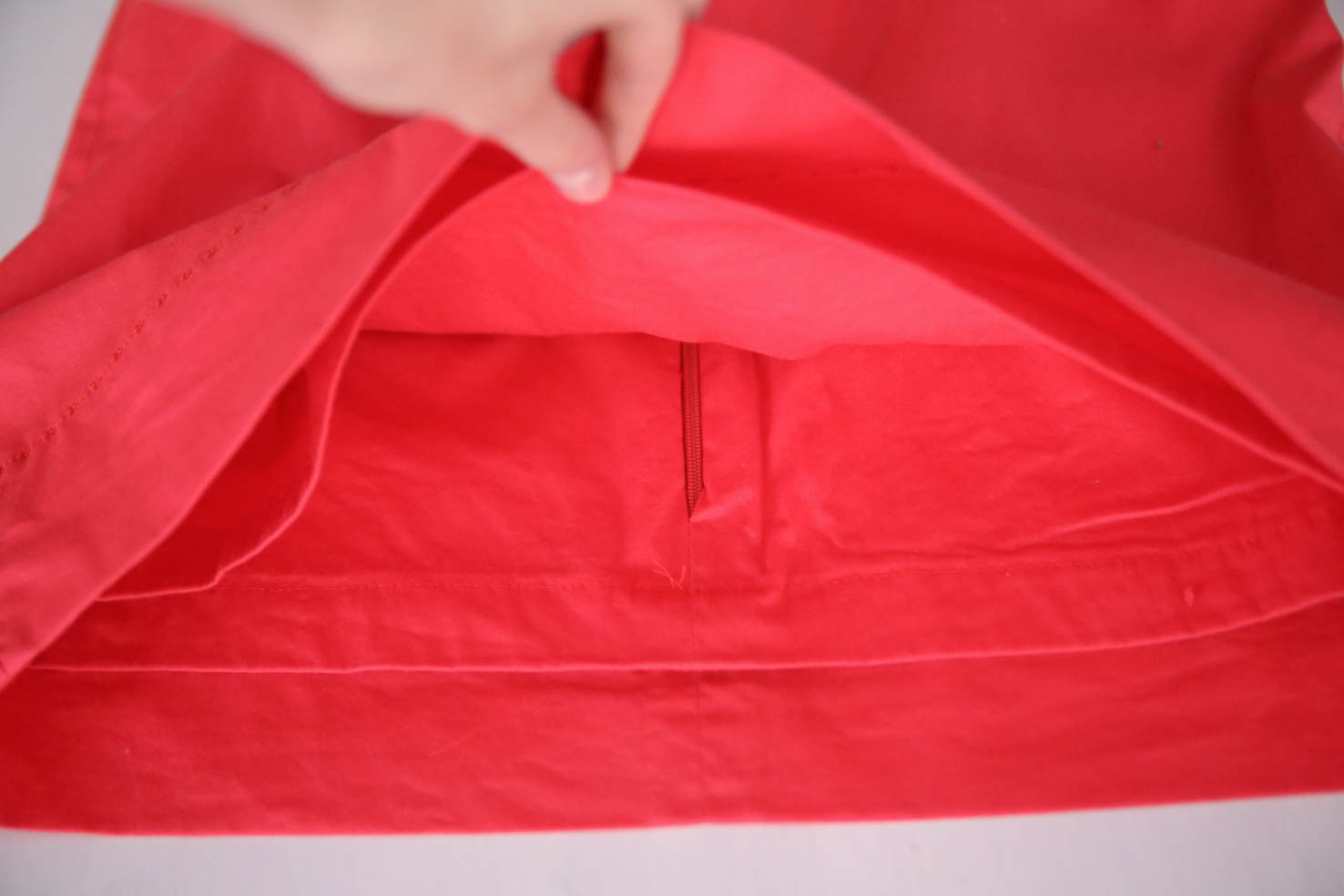 My original sketch included a scallop hem, but I had just completed a scallop hem on my daughter’s dress and knew THERE WAS NO WAY it was happening in the time I had. So, I went with a very deep hem and embroidered it in place, which I actually really love. 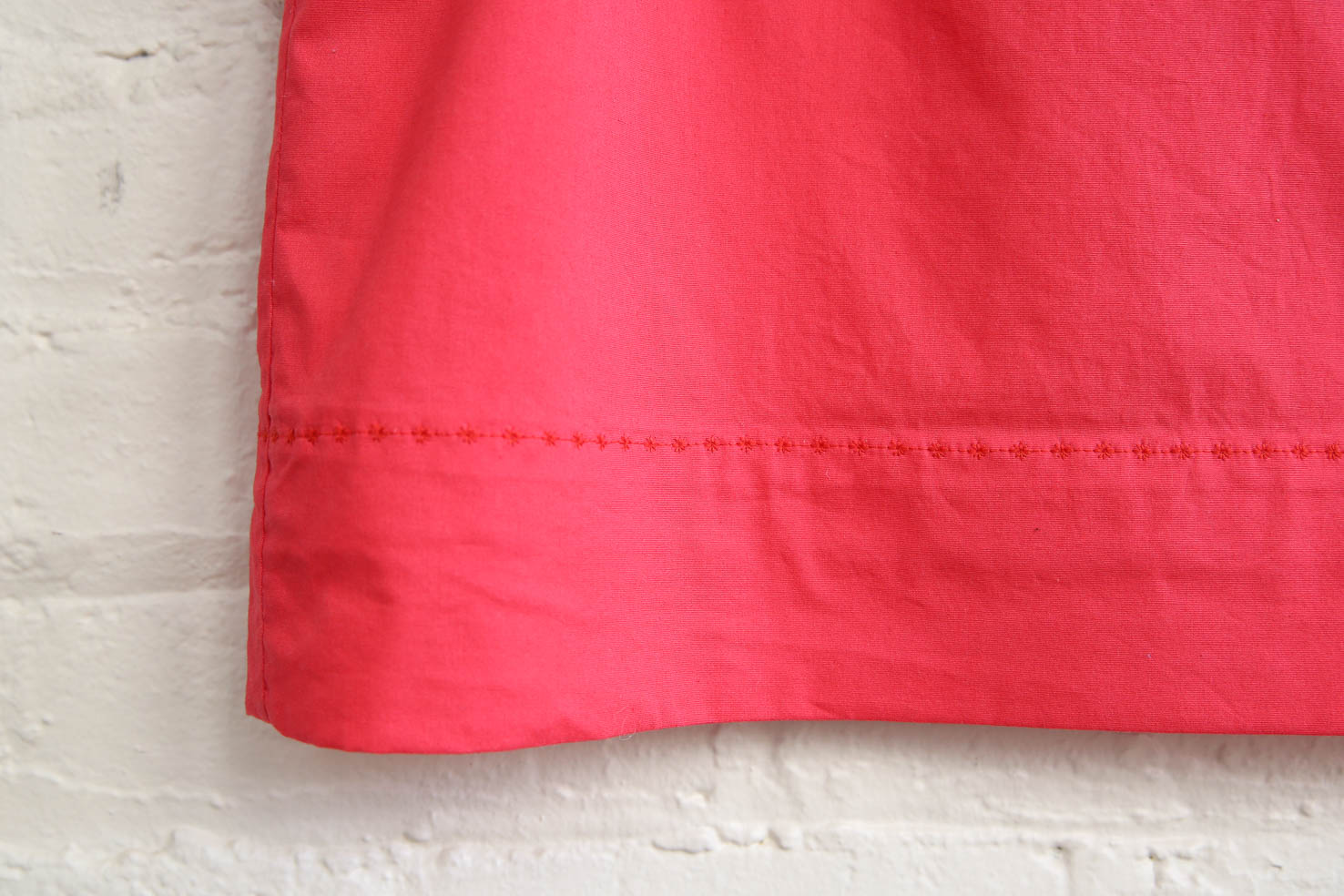 I named this dress after my friend Savannah because, like a sheath dress is always classic, she is as well. But, the back cut out and fun hem fit Savannah’s fun personality, too. I tend to name my self-drafted patterns after someone I could see wearing them and Savannah fit the bill perfectly for this little number.

P.S. Check out more of Joel and Renae’s wedding photos at Marissa’s blog. It was truly the most beautiful wedding I’ve ever been to. The venue was TO.DIE.FOR. Marissa did an incredible job capturing the day. She’s also an old friend from my Kansas City days, so it was great to see her and her husband, Nick. Go see for yourself how amazing her work is!