I mentioned on Monday that I would post a tutorial for the cardboard cutouts used to achieve the shadows in our engagement photos. It’s almost a lie to call this a tutorial because it is so simple, but here you go!
I got this idea from a photo on Two Girlz Stuff. She made a cardboard cutout that said, “We <3 Daddy,” and photographed her girls holding it for her husband’s Father’s Day card. I thought it was brilliant…and then wondered if I, too, could do it.
I didn’t really have much direction, so I just kind of flew by the seat of my pants. My co-workers looked at me like I was crazy when I saw an empty chair box in the hallway at work and immediately snatched it up. A girl I work with helped me collapse the box (which then made it taller than us!) and helped me carry it out to my car (in the wind…we both weigh around 120 pounds, so we were seriously blowing over). To get it into my car, I had to fold the entire back seat down in my CRV. Seriously…this was one BIG box.
Anyway, all of that to say that getting the cardboard could be the hardest part of this project. 🙂 I wouldn’t use anything thinner (like poster board) because it will quickly become flimsy once you make your cuts (even the cardboard became flimsy).
Basically, I destroyed my box cut my box apart and took inventory of what sizes I had. I am glad, after all was said and done, that my box was big because it left me with big pieces to work with. Once I did that, I laid on my stomach on the living room floor and started free-handing the letters in pencil (I did a lot of sketching/erasing/sketching/erasing). (You should also know that I am kindofsortof a perfectionist and I measured out the letters and spacing so everything would look even. I consider it worth the extra time investment.) Once I liked them, I started cutting them with a small paring knife (kind of like this). You could do it with a cardboard cutter, but I found it was easier to make smooth curves with the small knife (and I could make a “sawing” motion, which made it go faster).
First I made one with our initials. Please note that the “a” and “&” aren’t cut all the way through…they still have pieces attaching the middle sections to the outside–much like you would see on a stencil. (Otherwise the center pieces would fall out and who knows what they would look like!) 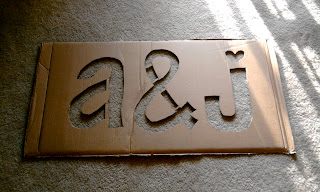 Here’s how it turned out. As you can see, the parts attached to the center aren’t super noticeable in the shadows, so all is fine and dandy. 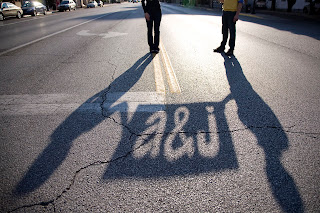 And here is the date cutout. I did hearts instead of periods because, well, it seemed like a fun idea. 🙂 This one was actually a lot easier because, A) I only sketched/cut out the “1” once and then used it to trace the other three (which saved me time AND made them look consistent)…so I only had to sketch the 1, 2, 7 and hearts, and B) there were no center pieces to worry about like in the “a” and ampersand. 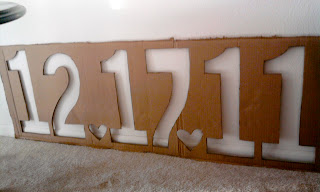 And I love how this one turned out as well. 🙂 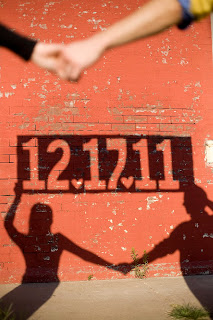 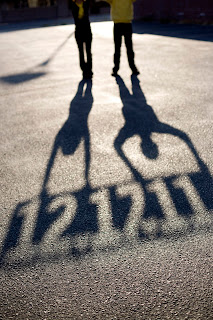 Here are both together! 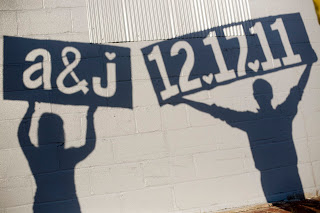 This project cost me nothing but my time (and a couple of pencils sacrificed their erasers). In total, I estimate it took me around 4 hours, but that could mostly be due to the fact that I didn’t know what I was doing and…my perfectionism (probably mostly that!). If you wanted to save some time, you could probably find a font you like, print the letters and trace the outlines from there, rather than free-handing.

Has anyone else tried this? Let me know if you have!