The Day I Said Yes

Nearly six months ago, a stranger walked into a coffee shop and completely redefined my definition of what a man could be like.
Somehow, despite knowing the same people, going to the same schools and being a part of the same community and sports groups for nearly ten years, our paths had never crossed (we blame the four-year age difference, but mostly, I think God wasn’t allowing our paths to cross until we were supposed to journey together). A mutual friend was adamant that we meet…ASAP. We were both reluctant–not looking for a dating relationship and not looking to begin anything. We were simply enjoying being single and weren’t looking to change that. But, fortunately for us, this mutual friend was so adamant that we meet, we decided why not?
So, we met at a local coffee shop (ironically, the first coffee shop we both went to right after moving to the Kansas City area nearly two years ago…within a week of each other! Seriously…parallel lives.), both wearing yellow (something important to note).
Within an hour, I was completely taken aback. Here I was–adamantly staying single (I had JUST told God I was grateful for my singleness and that I was going to stay single until he brought THE person for me…even if I had to wait another ten years) and then here I was…quickly watching my guard crumble. Who WAS this guy? HOW had I never met him before? What in the WORLD was happening to me??

I watched him walk to his truck after we said goodnight and, for reasons unbeknownst to me, immediately thought, “I’m going to marry that man.” I was shocked and scared by the thought that had entered my mind. I thought, what’s going on, God?!
On our first “real” date, we went to the Plaza for dinner and a movie. When we got back into his truck, we saw that a local church had left a flyer on the windshield. It had a candy cane attached and had a bullet-pointed list of Christmas service times. He pulled it off of the windshield and handed it to me and, with a sly smile on his face, said, “here…I got this for you! I wrote you a nice poem on it, too.” I read through it and responded, “ohhh really! Well…your poem has bullet points!”
A few days later, he was driving back to Wichita to spend Christmas break with his family. I wasn’t going to see him again until the week of Christmas, so on his way out of town, he stopped by my apartment and tied the candy cane and a slip of paper to my front door. I stopped dead in my tracks when I walked up to my front door and began to read the poem he had written for me…with bullet points.
Fast forward nearly six months. He had e-mailed me earlier in the day to ask if I wanted to go to dinner and get some coffee afterward. I, knowing what was coming within the next few weeks, was immediately suspicious. When he suggested we go back to the local coffee shop we met at after dinner, I felt that my suspicions were well-founded. Then, when he mentioned it was chilly enough outside that he thought he would wear the same yellow sweater he had worn when we met, I knew I was onto something.
After work, I went to the gym and went home to clean up. It was getting close to 7:30 and he mentioned that we wouldn’t have to go to the coffee shop if we didn’t have time. Wait, what? Maybe I’m not right…I thought this was part of your plan?, I thought.

We went to dinner and he made another comment about not needing to go to the coffee shop. Confused, I was. We did, however, make it to the coffee shop…where he launched into an extremely serious talk about what marriage is, what it should look like biblically and what kind of struggles we may face. At this point, I thought he was changing his mind about the whole idea. At one point, I even asked him, “Do you need us to back off?” He immediately said no, not at all, but I was seriously confused about what was going on in his head.
On our way home, I thought I was obviously wrong about what he may have had in store for that night as conversation turned to different topics. When we got back to my apartment, he walked up to the front door ahead of me to unlock it, but, as we rounded the corner, I saw a little white note tied to my front door with the same curly red ribbon. Smiling and speechless, I followed him up to the front door and, as he unlocked it, he smiled and said, “I think it’s for you…!” As he went inside, I stopped to read the note on the door. It was yet another bullet-pointed poem, quite similar to the candy cane poem from a few months earlier. This one, however, ended with a completely different line:
“Alina Michele, will you marry me?”
Shocked, surprised (that he had surprised me so well) and stunned, I turned to see him on one knee and barely heard him say, “Will you marry me?” I paused for a few seconds (he says it felt like an eternity) before finding my voice to say, “yes!” 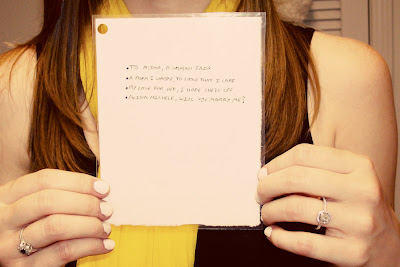 Today, I feel like the luckiest girl in the world. I am completely amazed at God’s timing. I’m amazed that we hadn’t met in the last ten years we both spent in Wichita, hanging out with the same people, graduating from the same college, playing sports for the same teams…and that is wasn’t until when God moved us both to Kansas City (during the same two-week time period), and continued to mold us individually, that we met. I’m amazed by how quickly we fell in step and started to walk the same journey. I do not understand how or why God does what he does, but I know that his timing is perfect. Thank you, Lord, for this man. I pray for your guidance and direction as we begin this journey of life together. I ask for your strength and wisdom. I ask that you mold me into a godly wife and him into a godly husband. I ask that you make us the kind of people that are stronger and more effective for your ministry than we ever could be apart.
Baby, I love you. I can’t wait to spend the rest of this life with you! 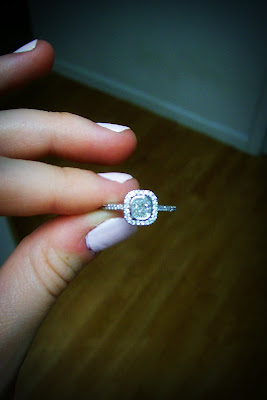