Happy Easter weekend, y’all! (And also a little shout-out to my mom…happy birthday, Mom!)
I’ve had such a great weekend. I’m seriously beyond blessed! Cowboy’s dad has been in town since Friday morning (he took the train into KC…fun!) and we went to a Good Friday service at Redeemer Fellowship in Westport with family and friends. Good Friday has such powerful significance. Never before have I felt the full weight of the day for what it was. I actually walked out of the service thinking, “OK! The count is on…only a day and a half until we can rejoice his resurrection!” Crazy mix of complete sadness and utter excitement/anticipation. I know the crucifixion was a necessary evil (and part of God’s plan), but golly gee…I still can’t believe he did that for me. Little.old.me?
Oh, how undeserving I am (and ever will be).
We parked just down the street from the church. When we got out of the car, I noticed a bunch of glassware and kitchenware in the windows of the building next to me. It reminded me of the windows of Blackwell’s (still need to go there!). I quickly asked Cowboy if we could come back the next day and check it out. He quickly said, “of course!” Love him.
So, Saturday started at Pryde’s Old Westport. I will let the pictures speak for themselves, but HOLY MOLY! How have I not known that this place existed before?! 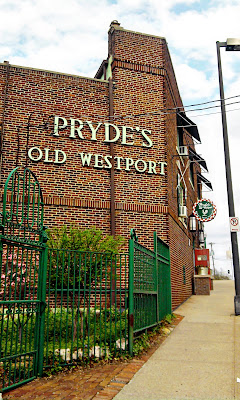 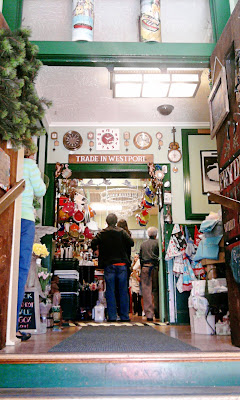 The plaque under the picture says, “This building was built in 1922 for the Helen Thomas School of Dance.” 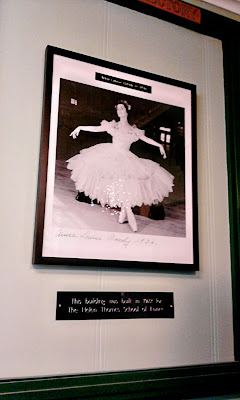 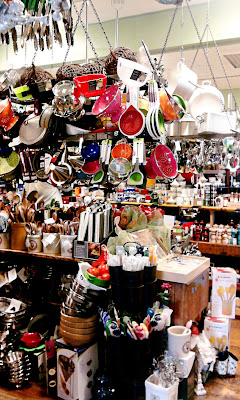 You can’t see her very well, but the lady behind the counter in the pink (with her back to the camera) is the owner. As we were checking out, Cowboy asked how long they’d been in business. The lady helping us said, “We’ve been here for 43 years,” and pointed to the owner saying, “She’s been in here since she was 8 years old!” Now that’s history, people. 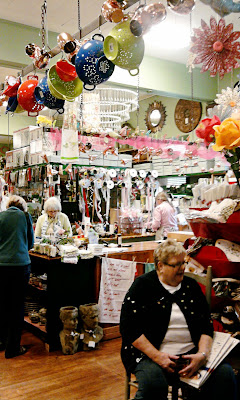 Another important detail to note is the kill-me-before-I’m-able-to-eat-my-weight-in-those-cookies bakery downstairs. Those cookies…the giant monster ones that size of my hand? Those are banana nut with burnt sugar frosting. Holy.Sugar.Monster. They were amazing. After trying a sample, there was no way we were walking out of there without one of those babies. 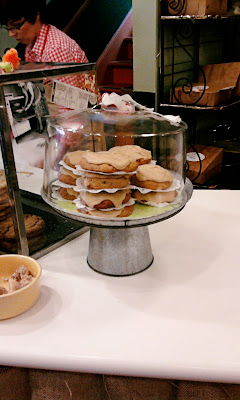 I also saw this section of cool trivets. I saw this leaf carved out of wood and I asked Cowboy if he could please learn how to carve wood. 🙂 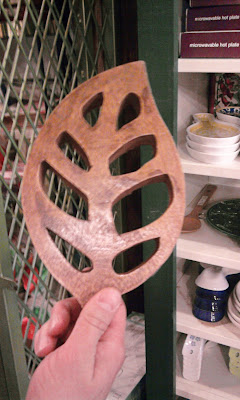 I DID walk out with a pretty sweet find. They were having a 60% off patio sale. I found this metal umbrella (technically a cover for a bird feeder) for $8-something (after taxes) and promptly decided it would be spray-painted yellow (duh!). 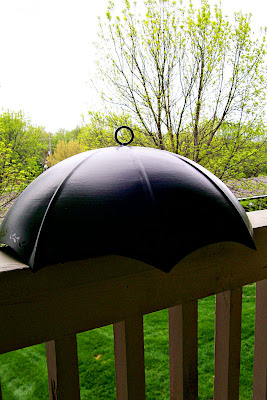 There’s a little hook underneath as well. I haven’t decided what exactly I’ll use this for. Any ideas? 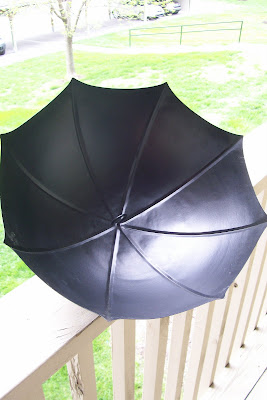 After Pryde’s, we headed around the corner and stumbled across Westport on Broadway Antiques. Nope…didn’t know that one was there either. Oh, Google, how you’ve failed me. 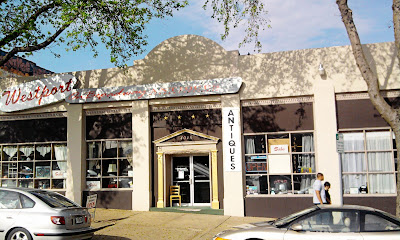 We went in expecting to find your average gaudy 1960s furniture and bad art. We definitely found it. 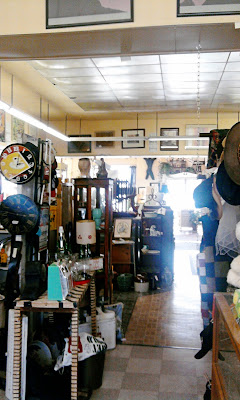 They also have an entire section of vinyl records, which can be really fun to look at. 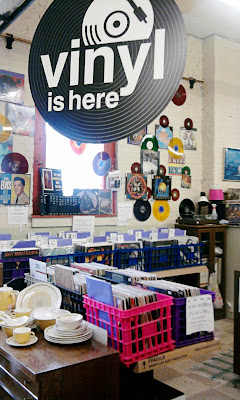 I also spied this section of old windows. Things like this always make me swoon a little, so if you’re looking for any, they have several in stock! 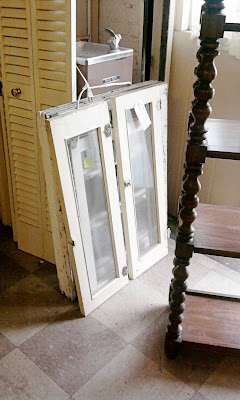 But then…then, I spied the top of an elusive blue jar. I literally stopped dead in my tracks. I said, “hey…wait…what is that blue jar back there?!” and ran around the gaudy 60s art to pick it up. I quickly squealed with glee. It wasn’t marked, so I asked the eclectic lady behind the counter if she could give me a price.
I had no idea what a gem she was, but she complimented me on my “beautiful” eyes, “pretty” necklace and “cute” boyfriend all within the first few minutes. Then she started running all over the store looking for other jars. As soon as she found a couple, we started running around the store pulling them out of booths. Before I knew it, I had a collection of 10 different blue jars…and she had marked most of them down by 50% when I saw my ticket “just because she wanted to help out a fellow collector.” Seriously…I didn’t even bargain with her. I didn’t even ask! Just $3 off here, $4 off here, 20% off here…”the booth owners will understand!” she said. 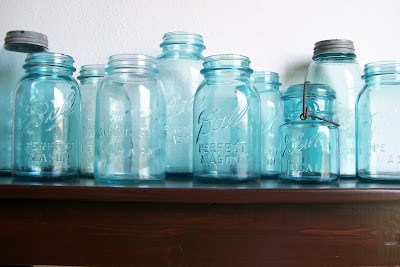 As soon as we got these babies home, we started dating them. As far as we can tell, each jar is completely genuine and all of them date back to before 1933. JACKPOT! 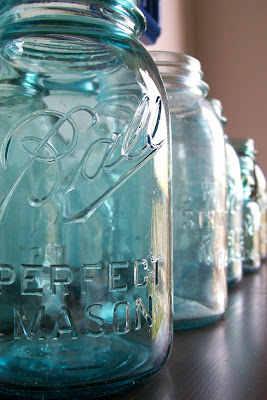 This one is the oldest and dates back to some time before 191o. You can tell because of the lettering and because of how the lid seals all the way down to the shoulder. After 1910, Ball started making beaded seals (that small glass lip that modern jars seal down to…see the lip at the top of the jar in the picture above?). 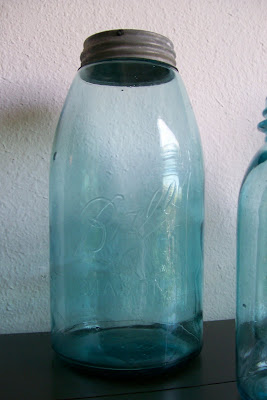 I haven’t been able to find a single one of these in Kansas City…and found ten in all different shapes, sizes and styles in one little antique shop. What luck!

After that, we made our way north to the Crown Center and went to the most exciting restaurant in the world….Fritz’s! They deliver your food by train on the system you see above the booths…then they lower it to your table. Best flattest grilled ham and cheese I’ve ever had. 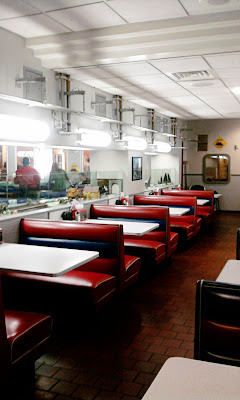 OK, so it’s a restaurant intended for kids, but I saw mostly adults in there…just for the record. 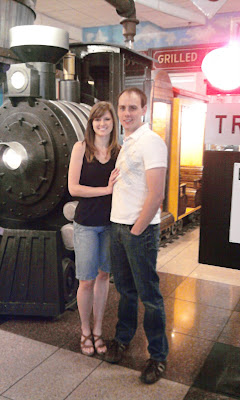 Sigh…just one more shot of the beauties.

OK, all together now.