I Haggled with the Man

It’s not uncommon for you to hear me say something like, “stick it to the man.” This is mostly in a light-hearted, joking tone, but occasionally, I really do mean it. Something I’m learning in life is that you don’t have to just “take” what’s given to you–you DO have a voice and you DO have (some) say in your life.

Before this post gets too serious, let me just say that this has nothing to do with the government or people in authority over me. The “man” I’m referring to is…Wal-Mart!

Let me provide some context…

As of late, I’ve been restructuring a little bit; in my home, in my job, and really, just in my life in general. This has involved cleaning out the old, repurposing what I already have and bringing in some new. So something I decided to do was focus on “building” my bedroom, much like I’ve been doing in my living room for the past year. This has involved a few different projects, but one thing that I had on my “REALLY WANT!” list was a big, chunky-framed, floor-length mirror. I’ve been eyeing them at the store(s) for quite some time.

Much to my demise, all of the mirrors that really fit the bill were $99 (at the low end) and even as much as $300-350. SAD. If you know me well, you know I’d never drop 100 bucks on a mirror (ha–much less 350!). I thought about buying an inexpensive, unframed mirror and building a custom frame (I could make it as big and chunky as I wanted that way, right?).
This is one of the cheaper mirrors I found…still $100. 🙁 (However, check out the reflection to see the awesome oversized blown-glass vase I scored for $19! Those babies retail for close to $75.) 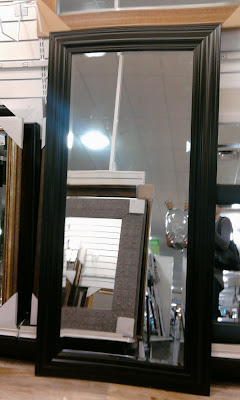 Luckily for me, before I took this project on, I popped into Wal-Mart to pick something up this past weekend.
Instead of finding what I was looking for, this is what I saw: 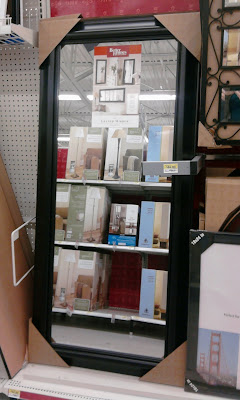 OK, so pretty similar, whatever. Until I looked at the price tag…$44!

FORTY-FOUR DOLLARS?!?!? Already I was sold. This mirror was about 6 inches shorter than other mirrors I had looked at, but for that price I’d forgive anyone for being a little on the short side. After all, I decided, I could always raise it up on something or hang it on the wall (instead of just leaning it against the wall like I had planned to do).
Then my senses came back. I thought, “For $44, I’ve gotta be sacrificing quality, right??” So then I picked it up. THAT BABY IS HEAVY. So I checked out the back–it’s professionally lined and already has hardware installed, in case I wanted to hang it. No skimped quality there.
So I found the nearest male employee (told you it was heavy, girls) and he loaded it on top of my cart. It was pretty humorous how I had to finagle and balance it all on my way to the front (and then out to the car, lol) and I got some pretty awesomely strange looks from a few onlookers. (Wal-mart is the best place to people-watch, after all. I probably would have laughed at myself too.)
While making it to the front of the store, I was inspecting the frame for any damage. Nothing structural, but I did find one scuff and one scratch on the bottom of the frame. It was the last one left, so when I got to the cashier, I politely asked for a manager. Out comes her manager and I whip out my best “this product is damaged…can we please discount it?” face and story.
Well, folks, it worked. I haggled Wal-Mart down to $36 for this beaut of a mirror. Already 55% cheaper than any other counterpart and I haggled another 20% off! BOO-YA.
Here are the mirrors side-by-side: 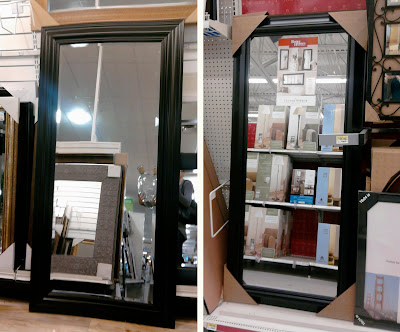 Haggling never felt so good.
What about you guys? Have you ever “haggled with the man”?