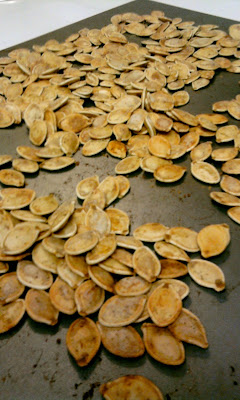 If you’re carving pumpkins this season, then don’t forget to separate the seeds from the “guts” and roast them! The worst part is cleaning the pumpkin out, but you have to do that if you’re carving it anyway…so you might as well use the seeds, right? Just separate the seeds from the “guts”, then boil them in saltwater for 20 minutes (this cleans them as well as salts the insides of the seeds). NOTE: they will look grey after you boil them! Then toss them in a bowl with some melted butter and salt (I used garlic salt as well as seasoned salt) and bake them on a baking sheet for 30-45 minutes at 300 degrees, stirring occasionally. Roast them until they’re golden brown!
Welcome to fall!! 🙂