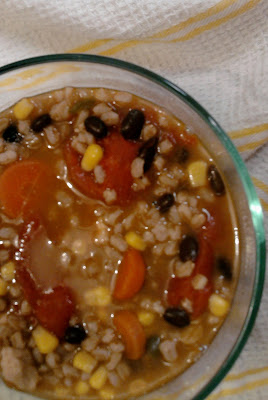 While the South American grain, quinoa, has been gaining popularity with American foodies as of late, I recently found Farro, a middle eastern grain.

It cooks up to the look and texture of barley. I’ve found it to be great in soups or alone and have also seen it used in salads. I love cooking with quinoa because of it’s great nutritional value. Much to my delight, farro has a nearly identical nutritional profile. So, if you’re loving quinoa and looking for a similar grain to use (as in nutritionally–these grains aren’t even close to being cousins. Not even friends!), give farro a try.

(Pictured is a chicken, farro and vegetable soup. Super easy!)