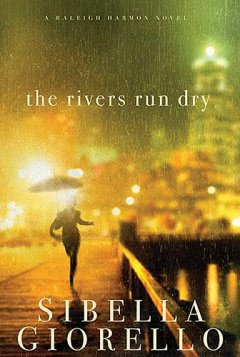 This year, Sibella Giorello published her second novel, The Rivers Run Dry. As an avid reader and fan of suspense in book-form, I jumped at the chance to review this book.

The Rivers Run Dry is about a newly-transferred FBI agent Raleigh Harmon, a girl (from the area’s richest family) missing from her hike and a spidery web of people and their personal problems. Since her new boss decided beforehand that she would fail, Harmon sets out to find the missing girl–and to prove herself. Meanwhile, her aunt is Seattle’s most eccentric woman, her mother is losing her sanity, she’s grieving the loss of her father and she’s been assigned with the department’s worst car–the “Barney mobile.” A classic case of the newbie’s bad month, Harmon ends up making discoveries she never planned on.

Front to back, Giorello’s strength is in her ability to describe. Though she’s no Steinbeck or Fitzgerald, she successfully paints illustrious pictures of the surroundings. However, she paints beautiful pictures within which the characters seem very dull at times–a stark contrast. Then, the non-main characters are easy to forget–which proves inimical for the book’s ending. While writing a book is something to which I give the utmost respect, this book is simply not a page-turner. It is slow at times and doesn’t quite live up to its suspenseful description.

If Giorello’s goal was to introduce the reader to the main character, she achieved her goal. If it was about the story itself, this book is weak. My final thought as I finished the book was that it will be quickly lost amongst the masses if it is written to stand alone, but that it would serve as an excellent series intro. Much to my delight, the final page in the book was a note telling readers to look forward to the next installment in the Raleigh Harmon Series.

All in all, I give The Rivers Run Dry three out of five stars, a thumbs up and a plan to read the next installment with hopes of a stronger storyline.

I’ve been given the opportunity to be a book reviewer for Thomas Nelson. If you’re interested, you can preview the book here, or purchase the book here.